Fans were waiting at the St. Cloud Regional Airport on March 31 when the men’s Husky Hockey team arrived after defeating Miami 4-1 in Ohio to advance to the school’s first ever Frozen Four. Video by Athletic Media Relations

A coach’s dream, he called them. 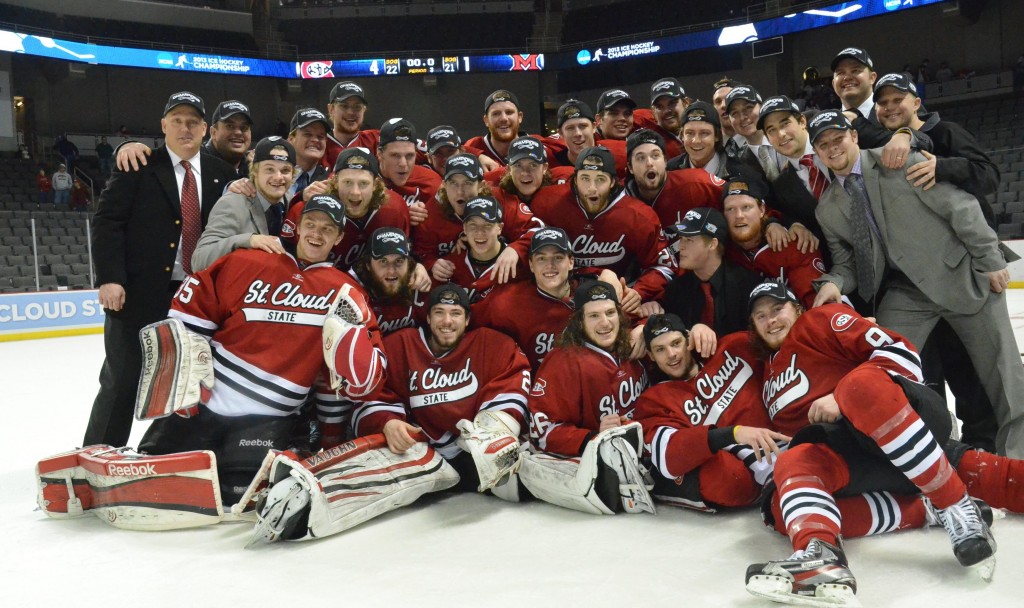 Thursday’s game will be televised on ESPN2, DirecTV 209 and DISH 144. Gina Carlson and Scott Gross will call the radio broadcast for KVSC 88.1 FM. Don Lyons, the voice of men’s Husky Hockey, and Dave Reichel ’79 will broadcast for 1450 KNSI/FM 103.3.

Yale University and University of Massachusetts Lowell play April 11 in the other semifinal. The national championship game is April 13.

LeBlanc, a math education major from Hermantown, earned 24,707 votes in fan balloting, and is one of three finalists.

A 23-member selection committee will name the 2013 Hobey Baker winner 5 p.m. CDT April 12 at the Frozen Four in Pittsburgh, on the NHL Network and via HobeyBakerAward.com.

The Dream Team is lead by Drew LeBlanc, a math teacher in training from Hermantown who was sidelined most of his senior season by a compound leg fracture. LeBlanc put team first, came to practices in a wheelchair, then returned for a fifth year. He is one of three finalists for college hockey’s highest honor, the Hobey Baker Memorial Award.

At the other end of the bench is Brooks Bertsch, a sophomore forward from Dubuque, Iowa, who took turns this season sitting in the stands, as Motzko rotated forwards in and out of the lineup. Bertsch recorded three assists at the Midwest Regional.

Between the pipes is goaltender Ryan Faragher. The lanky goaltender Motzko calls “country strong” persevered in the shadows of the team’s stellar and more flamboyant forwards. In two regional games the sophomore from Fort Frances, Ontario, recorded 37 saves and gave up two goals. Faragher skated into the limelight Sunday, earning an All-Tournament Team nod.

Exploding on the scene is Joey Benik, a first-year forward who scored two regular-season goals while recovering from a broken left leg, incurred during the first hour of his first college practice. The Andover native was named most valuable player of the Midwest Regional, recording four goals and an assist in Toledo.

Aunika Schraw celebrates the Huskies win at the St. Cloud Regional Airport with other fans.

Consider forward Cory Thorson and defenseman Andrew Prochno. Thorson, a junior from Crystal, was thrust this week into a new role, centering linemates Bertsch and Benik, a combination that hadn’t played a game together all season. He responded with three goals and assist at the regional, earning All-Tournament honors. Prochno also made the All-Tournament team, recording two assists on the weekend, while battling on the end boards and defending in front of the net.

Earlier this month, Motzko talked on his 1450 KNSI “Bob Motzko Show” about the end of his bench, the temp workers who labor every practice, but on game day sometimes wear the cardinal red and black, sometimes wear a jacket and tie.

He might as well have been talking about the character of his entire team.

“This core of guys, their attitude has been outstanding,” said Motzko, seated a few feet from the MacNaughton Cup, symbol of St. Cloud State’s first Western Collegiate Hockey Association title. “Not one guy has pouted. Not one guy has even given you the look. It’s kind of a coach’s dream to have that happen in a season.”

Thorson, at the post-game press conference, echoed his coach: “We have 25 guys in that locker room right now that have worked their tails off all season and made such a big dream come true.”

A Dream Team, indeed, with more dreams to fulfill.