A crowd gathers in the atrium of the Herb Brooks National Hockey Center for the Sept. 28 grand re-opening. Photo by Adam Hammer ’05

With four words, the men’s Husky Hockey coach electrified the crowd in the atrium of the renovated and expanded Herb Brooks National Hockey Center.

“It can happen here,” said Bob Motzko, to about 1,000 people gathered Sept. 28 to see the results of a $14.7 million expansion and renovation investment — $6.5 million from the 2008 Legislature and the remainder from donors. 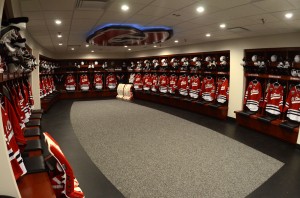 ” ‘It can happen here’ means anything can happen,” said Motzko. “You have to believe in a motto in your heart, with every fiber, if you’re going to recruit these student-athletes to come here — that it can happen here.”

“Over a quarter-century ago Herb Brooks, Brendan McDonald and Bill Radovich envisioned a house that would change not only the face of the campus, but the face of this community. That seed has now been engineered into what you see today.”

The late Brooks became an American hockey icon when he coached the U.S. Olympic Team to hockey gold in 1980. He coached St. Cloud State to a third-place NCAA Division III national finish in 1987.

Radovich, who had a seat of honor at the ceremony, is a former vice president for administrative affairs.

“This is your house, Husky fans. Welcome home.”

Potter closed his remarks with a pledge to continue developing the hockey arena.

“In this facility students, faculty, staff and members of our community will enjoy hockey in a way they’ve never known. Today’s celebration is but the first in many milestone events that will take place in the Herb Brooks National Hockey Center,” said Potter.

“This is your house, Husky fans. Welcome home.”

Women’s Husky Hockey is undefeated in the Brooks Center, with wins this week over Team Japan and University of British Columbia. Amy Olson, a junior captain from Roseau, spoke at Saturday’s ceremony. The team hosts Quinnipiac University Oct. 4-5.