A Jan. 19 #WomensWave march in downtown St. Cloud is expected to draw attention to “the political power of diverse women and their communities to create transformative change,” according to organizers.

One of hundreds of marches scheduled Saturday, the St. Cloud march will commemorate the 2017 Women’s March on Washington, which is viewed by many as a new birth of the women’s movement.

“We did make history, with more than 5 million people across the globe taking to the streets in protest, outrage, hope and love, including the 680,000 people in our nation’s capital,” said Jane Olsen, one of the coordinators of the St. Cloud planning committee. 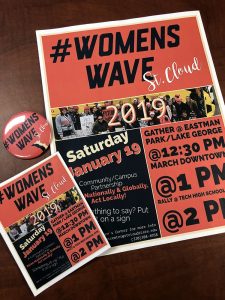 Olsen, who directs the Women’s Center at St. Cloud State, organized the St. Cloud bus trip to the 2017 march in Washington.

Participants should gather in Eastman Park at Lake George. The march downtown is at 1 p.m. There is a 2 p.m. rally in the gymnasium at Tech High School, opposite Eastman Park.

“On January 19, people will unite locally, in Washington, DC, and in communities throughout the country to make their voices heard again,” said Hedy Tripp ’96, a planning committee member.

“We’ve been organizing locally to advocate for the policies that matter to us, and impact women’s lives, and we’re flooding the streets in solidarity with our sisters in D.C. to remind the country that St. Cloud resists and persists,” Tripp said.

Read about St. Cloud’s participation in the 2017 march in Washington D.C.