St. Cloud State University continues to improve upon its multi-year branding initiative on campus thanks to significant contributions from the SCSU Alumni Association and SCSU Foundation, two private organizations that support the University.

“As the University prepares for its 150th Anniversary in 2019, we wanted to help amp up campus pride by assisting with this campus branding initiative,” said Kristen Baas, president of the Alumni Association Board.

“As the University prepares for its 150th Anniversary in 2019, we wanted to help amp up campus pride by assisting with this campus branding initiative,” said Kristen Baas ’90, president of the Alumni Association Board. “With Homecoming’s return in 2018, we achieved our goal of alumni visiting campus and coming away filled with pride and enthusiasm, as well as being strong, vocal ambassadors for St. Cloud State.”

During the 2018 spring semester, Halenbeck Hall and the James W. Miller Learning Resources Center acquired new signage through an initial gift by the Alumni Association and the Foundation. 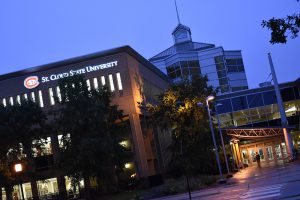 James W. Miller Resource Center displays the new illuminated sign, which was funded by the Alumni Association and Foundation and mounted in February 2018.

Mounted on the building, the Miller Center signs feature the St. C logo and the St. Cloud State wordmark. One sign faces south toward Barden Park. The other faces west toward Fifth Avenue. Each sign is more than 33-feet wide.

At Halenbeck, a Husky dog logo hangs over the walkway to the west entry near the gymnasium. The logo is nearly seven-feet wide.

“The SCSU Foundation is very grateful to the Alumni Association Board for their partnership in advancing the campus branding initiative,” said Matt Andrew, vice president of university advancement. “This is a great step forward in creating an outward sense of pride that contributes to a visitor’s first impression of campus.” 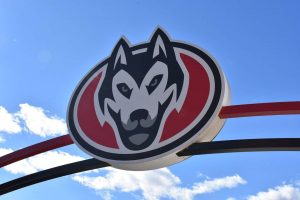 The university’s secondary Husky head logo was mounted over the walkway at Halenbeck Hall in February 2018 and funded by the Alumni Association and Foundation as well.

The signs were manufactured by Lawrence Sign, St. Paul.

“Huskies everywhere should be proud of their alma mater,” said Robb Walker ’78, CEO of Lawrence Sign. “We are proud to be a part of building an exciting and welcoming environment for visitors on campus.”

« Editorial: SCSU, SCTCC contribute much more than dollars and cents
How Philando Castile’s mother works to help those impacted by gun violence »