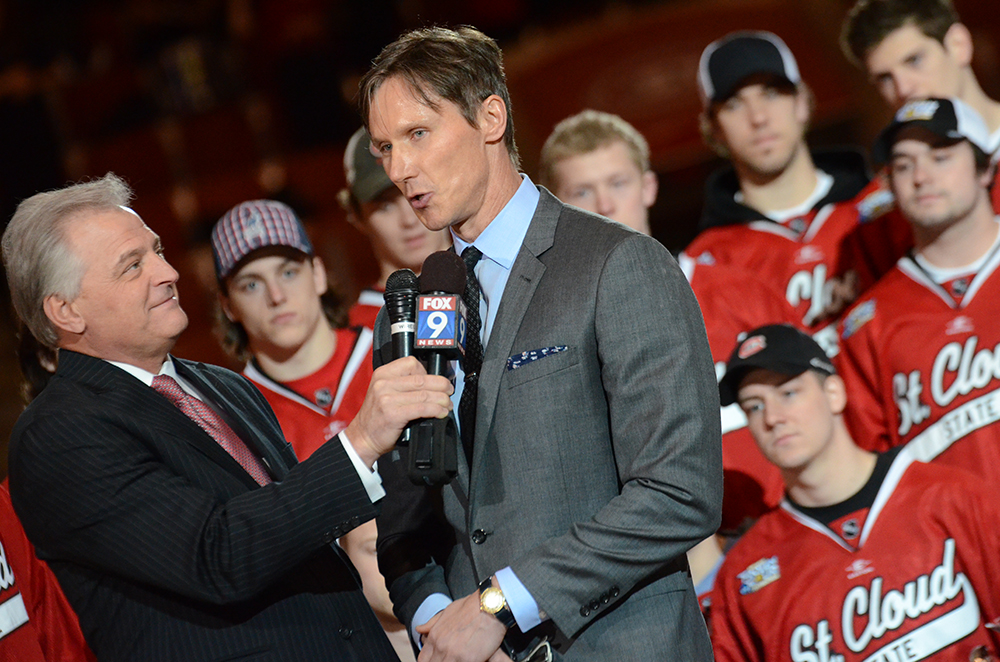 “Herb created connections between people and ideas,” said President Earl H. Potter III at an April 17 press conference. “And St. Cloud State is a place that connects people and ideas.”

“We have a vision for this university. You can see it come alive as you drive throughout campus today,” Potter said. “This is our new front door. And, I am very proud to share the news with you that this is the Herb Brooks National Hockey Center.”

Brooks’ son, Dan Brooks, spoke on behalf of his mother, Patti, and his sister, Kelly, at the press conference and on-ice celebration for the historic 2012-13 men’s Husky Hockey team.

View a photo gallery from the press conference and “Celebrate with the Huskies” event.

In a tribute video that played on the arena scoreboard, he mused about his father’s year at St. Cloud State.

“He looked at the opportunity at St. Cloud, to turn that into a Division I hockey program, and he took it on 110 percent,” said Dan Brooks. “He was his happiest when he was in St. Cloud.”

Brooks teamed with the late President Brendan J. McDonald, former vice president Bill Radovich and others to elevate Husky Hockey to a NCAA Division I program, fulfilling a promise Brooks made to hockey legend John Mariucci.

Brooks also helped secure construction funding for the arena that bears his name.

The new name coincides with completion in mid-June of a $14.7 million renovation and expansion of the arena and development of future construction projects. 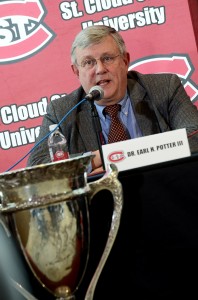 Two assistants from Brooks’ 1986-87 team, former coach Craig Dahl and current coach Bob Motzko ’89, have guided the program in the Division I era, creating one of college hockey’s top programs, with a combined nine NCAA Division I tournament berths and a 2013 Frozen Four appearance.

Potter called Herb Brooks “a man of the people,” calling attention to his committment to developing players and promoting hockey at St. Cloud State and across Minnesota.

Sue Prout, long-time Husky Hockey fan and secretary in the President’s Office, recalls that Brooks pocketed $1,000 of his salary as head coach and gave the other $24,000 to Dahl, his top assistant.

Brooks’ son echoed that “man of the people” view in the tribute video: “He wasn’t a flashy guy. He wasn’t a materialistic guy. It wasn’t about the money for him. He was grass roots, build the game from the ground.”

“Hockey could not be in a better place in our state and it connects back to Herb Brooks,” said Motzko. “This is a great university. This is a great community. We can puff our chests out.”

Said Motzko: “This is a memorial to a man who meant so much to this state and this university.”