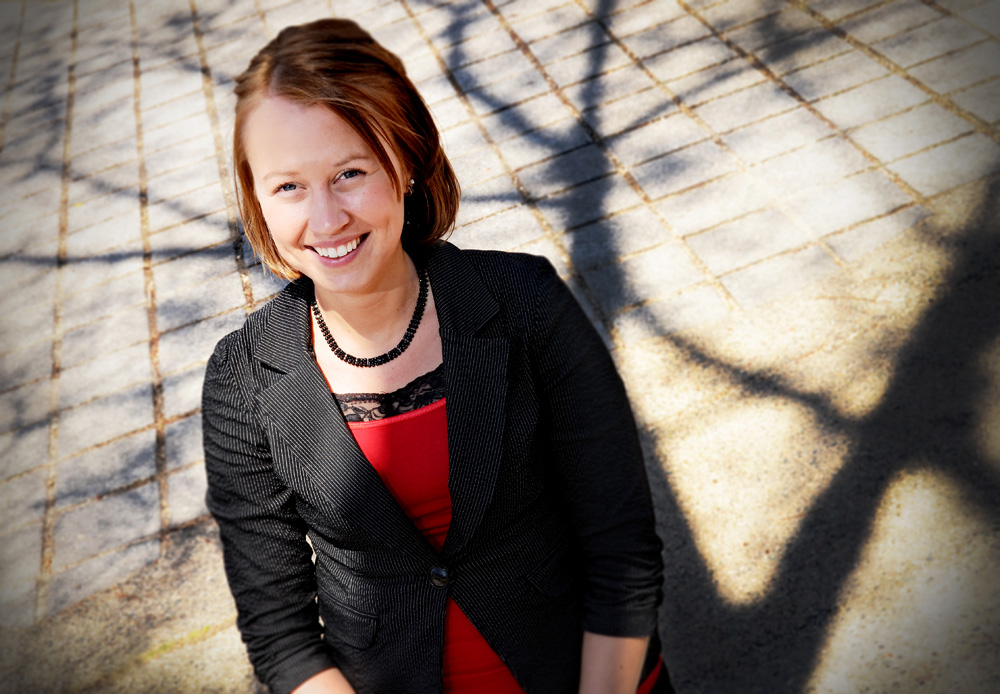 When the weather gets rough in Central Minnesota, Erin Hausauer ’02 has a plan. She also has detailed plans of action for potential disasters ranging from a train derailment to a health pandemic. As emergency management director for Stearns County and the city of St. Cloud, Hausauer’s job is to prepare for a multitude of worst-case scenarios.

“We plan for large-scale emergency situations that draw on critical resources in the community,” Hausauer said. Frequently asked to explain her role to the public, she sometimes sees her audience glaze over at the mention of “facilitating an emergency response plan” until she adds one important detail: “And we sound the sirens!”

Hausauer started with the Emergency Management Department as a planner in 2004. She was appointed director in March 2013. Three months later, a powerful summer storm felled trees and power lines, leaving thousands of businesses and households without electricity. The countywide storm involving 17 municipalities was the first test of Hausauer’s leadership.

“It turned out to be a straight-line wind event with 60 to 70 mph winds. For me, one of the scariest parts of that storm was that it happened in the overnight hours, so you have less awareness,” Hausauer said.

“When our office gets involved it’s generally large scale or when the resources of other departments are overwhelmed. We were involved because of the scope of that.”

She and her team encountered quickly deteriorating road conditions on the way to the Emergency Operations Center. Downed signs, trees and other debris hampered travel. Problems continued at the center, where issues with the radio system made communications challenging.

None of this rattled Hausauser. “We’d been through this before. Stearns County is one of the highest-ranking counties in the state for tornadic activity and significant storms. I was very familiar with what we needed to do. I was not a fish out of water. I didn’t really have any anxiety or tension about that process. I knew what we were getting in to.”

The storm caused $500,000 in uninsured damages to public property resulting in a Presidential Disaster Declaration. Hausauer continues to document the cost of repairs for federal reimbursement. “We have 18 months to do work and bring the community back to normal,” Hausauser said.

Hausauer started college considering a career in occupational therapy and transitioned to social work when she transferred from St. Catherine’s to St. Cloud State. The new program clicked with her as she trained to connect people with personal difficulties to needed community support. Her current job follows the same principles on a larger scale.

“I was always interested in the macro-practice side of things including community development and policy. This fit right in.”

Hausauser considers being a team player an essential skill for her position. Between emergencies, much of her time is spent updating plans with community partners like the American Red Cross. Planning and functional testing is done in the basement conference room in the Stearns County Law Enforcement Center. City, county and nonprofit service providers meet with her to talk through disaster scenarios.

“We work with a lot of unique situations. Things that happen in the middle of the night. To be able to talk through those scenarios for successful outcomes helps us out. Not everyone has people willing to come to the table to participate regularly.”

Field testing takes place at sites of potential accidents like the St. Cloud Airport. “We bring together all the emergency responders who would be called in case of a crash. We set it up,” Hausauer said. “We are very fortunate in this community to have the partnerships and coordination and collaboration.”

Stearns County is also set to receive evacuees in case of a catastrophic incident at the Monticello Nuclear Generating Plant. While Hausauer considers the chances of such a mishap to be “so, so slim,” she and her team are ready to handle the logistics.

The focus of emergency management has changed since Hausauer’s predecessor helped implement the local 911 system. In the past, there was greater emphasis on the civil defense system with an overriding concern about large-scale nuclear emergencies. More recently, her department has adopted an all hazards program.

“We plan for anything and everything,” said Hausauer, including technical hazards and intentional acts in a long list of potential threats. She also noted the need to respond to the public’s concerns.

“When we have media coverage of emergency situations elsewhere, like train derailments, it brings to the forefront the hazards in our community,” Hausauer said. Media-driven worries aside, she believes seasonal weather hazards are the area’s greatest ongoing risk.

Hausauer has been to St. Cloud State several times in recent months to assist the university’s Department of Public Safety with emergency operations preparedness. Her role is to help identify key personnel on campus and to set the stage for responding to “any number of hazards or scenarios.”

“We assisted with the incident command training. We’re continuing to help the University with emergency management as they develop their plan,” Hausauer said.

Carrying out her work involves collaboration with many government entities. For example, Hausauer must consider the potential repercussions of an area dam failure. Both the St. Cloud Hydroelectric Facility Dam, which spans the Mississippi near campus, and the Sartell dam, upstream, could potentially impact St. Cloud State in the event of a collapse. Hausauser works with the cities of Sartell and St. Cloud to minimize risks and prepare for the worst.

“Tying it all together is the most challenging to learn,” Hausauer said. “It also changes all the time. One year, our federal mandates may have something to do with terrorism. The next year, it’s about cyber-security. Keeping up with that movement certainly makes it complex.”

Out of the storm

Hausauser considers being engaged in the community a welcome aspect of her position. “There’s a wide variety of people we connect with, which is certainly a perk. It’s exciting to have the opportunity to do something different every day with different people.”

Hausauer regularly uses Facebook and Twitter to connect with the public and “establish a base of reliable information.” She tweets weather advisories @StearnsCountyMN using the hashtag #stearnsweather.

Regular public speaking engagements are also a part of the job. “We do a lot of outreach to Rotary, Sertoma, schools and local businesses. We need the support of the community. We need individuals to be prepared.”

Outside of work, Hausauer leads a quiet home life in Richmond with her husband, Jeremiah, and their two dogs. In good weather, she and Jeremiah like to spend time at area flying fields where they enjoy his hobby of flying miniature airplanes.

When things turn nasty, Hausauer starts monitoring the disaster threat. She can take command of the situation remotely or return to her office in St. Cloud. Most often, she plays a background role in assisting other agencies directly responding to the threat at hand.

“We’re kind of a behind-the-scenes operation until big things happen.”

« Do: Beth Sorenson ’90 sets music standards
Make a difference: First in their field »