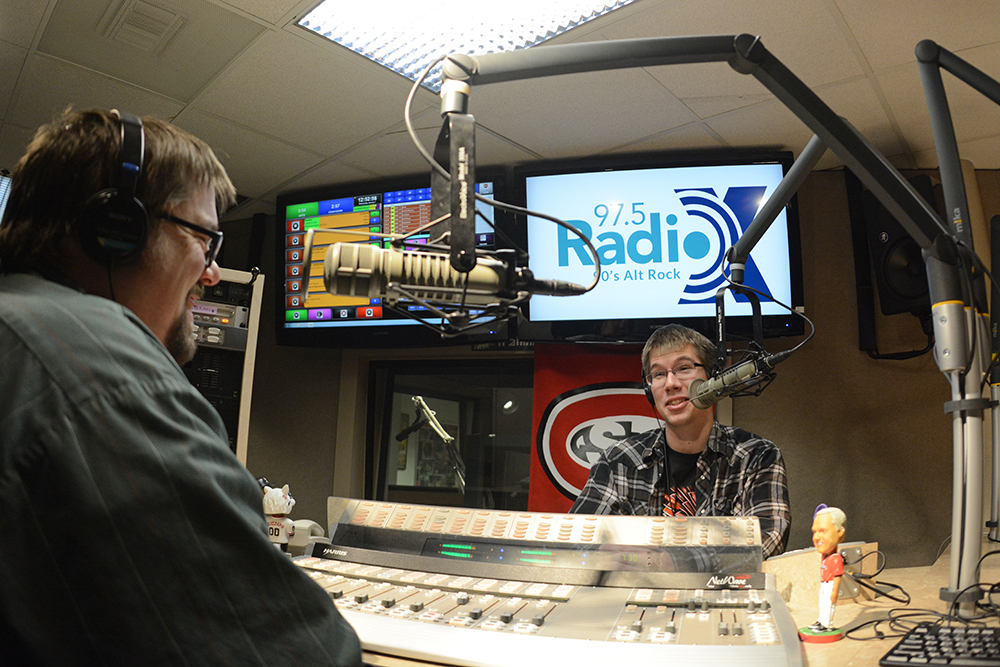 The station went live Jan. 12 with a sample of its programing before going live with regular programming Jan. 15. Its focus is on post-college rock, grunge and other ’90s alternative music. The name is nod to Generation X, the generation that first gravitated to alternative radio.

St. Cloud State does a good job of teaching students radio theory and KVSC introduces them to public radio practices, but students were missing out on those commercial-specific skills that RadioX will now provide, said Jim Gray, KVSC operations manager.

Starting RadioX has given Wheeler and Klopp the unique experience of helping start a new radio station from scratch. It’s something only about 200 people in the nation have done, Gray said.

“I’ve been doing radio now for 25-plus years, and this is my first time being involved in a from-scratch operation,” he said.

“This is all hands on. This is all real experience. This isn’t book stuff. This is me actually creating IDs, contacting people, building logos.”
— Trevor Klopp
RadioX Program Director

Wheeler and Klopp were involved in finding the frequency and call letters, applying for the new radio license and finding and programming the necessary equipment to run the station. The students worked on the project through an independent study project.

About a dozen other students are helping to launch the new station this week with additional students eager to join once the station is up and running, Gray said.

While students may get credit for some of the work they do for the station through graphic design, website design or audio production, the station won’t be directly tied to a specific course or program.

Instead, it’s an opportunity St. Cloud State has created for students to get hands-on experience outside the classroom. RadioX is designed to teach students skills necessary to work in commercial radio. Students running the station will use music programming software and voice tracking.

“This is all hands on,” he said. “This is all real experience. This isn’t book stuff. This is me actually creating IDs, contacting people, building logos.”

The station, housed in a former storage area in KVSC, is designed as a commercial radio station — complete with stand up desks with spots for a host, cohost and guest commentators. Plans are to build a new space for the station in summer across the hall from KVSC, Gray said.

“This is stuff that’s industry standard,” Klopp said. “… So I think that’s been a real treat to work with that.”

Wheeler, a non-traditional student with previous experience in commercial radio, said helping develop RadioX is introducing him to new skills that are important for getting back into the business. 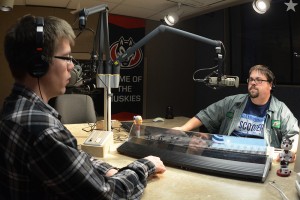 “Most jobs in the private sector would expect you to know those things,” he said. “… If I know voice track, automation; it gives you that edge.”

RadioX is a Low Powered FM (LPFM) broadcast radio station — meaning its signal is only protected in a 9-mile radius around St. Cloud State.

The goal of a LPFM station is to reach a specific community, Gray said, adding that testing has proved the signal reaches far beyond its immediate radius.

Funding for the $70,000 station launch was raised through KVSC fundraising efforts. And the new station won’t compete with what’s on KVSC or commercial radio in St. Cloud, he said.

Radio X is building on the resurgence of the alternative music scene happening among public and commercial stations in the Twin Cities market while also addressing the nostalgia of ’90s music fans, he said.

That focus serves a need in the market for listeners who aren’t old enough to enjoy classic rock, but also aren’t interested in modern rock.

Klopp added that as a traditional college student he’s familiar with many songs from the genre.

“It’s been a joy to dig through these tracks again,” he said.