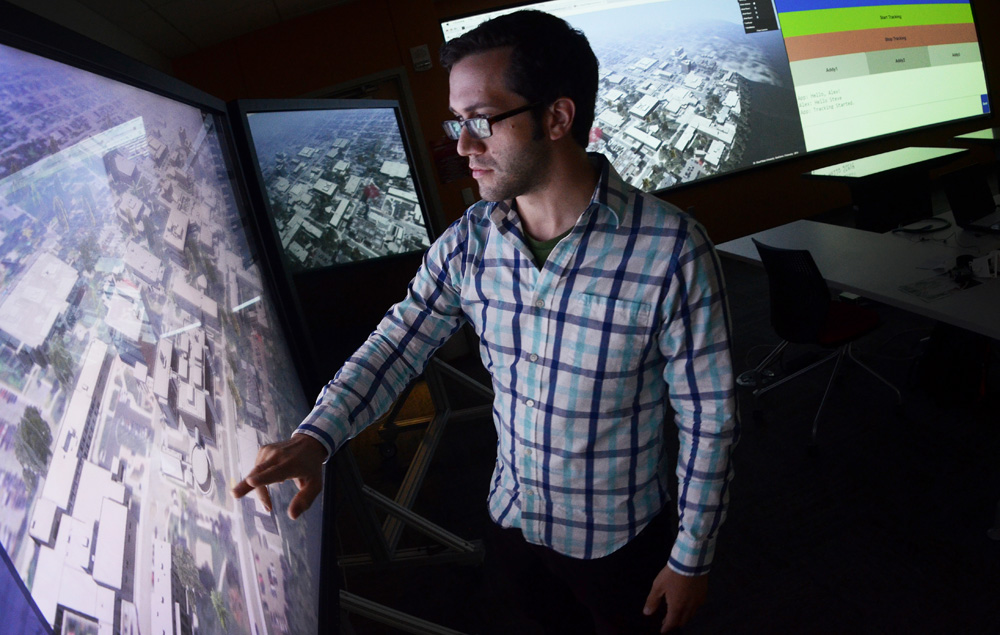 Sophomore Steven Henningsgard demonstrates the use of software being developed though a partnership with GeoComm in the St. Cloud State Visualization Lab. Photo by Adam Hammer ’05

Jose Araujo smiles self-consciously as he spins slowly in his chair. A few feet away Visualization Engineer Mark Gill scans Araujo as he moves.

After a complete 360 spin, Gill uploads the image which reproduces Araujo’s face and trunk — matching the color of his skin and hair and reproducing the logo on his shirt.

A 3-D image like this one will one day be used in a virtual computer lab Gill and his student workers are envisioning designing for use with an Oculus Rift, a virtual reality visor that can give a user complete visual immersion in a virtual world.

With the 3-D scanner, students could attend a class completely within the virtual classroom. They’d look down and see a representation of their own arm and could interact with a virtual computer table.

Gill foresees a program where students can interact and work together in a virtual program with classmates seeing their work as it happens displayed on large screens. 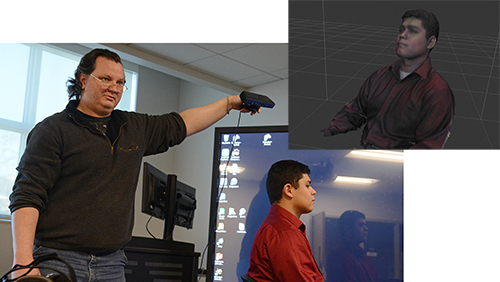 Visualization Engineer Mark Gill scans a 3-D image of Jose Araujo for use in a virtual program. Photo by Anna Kurth

A virtual reality classroom is the newest project being developed in the Visualization Lab, a high-tech classroom located in the Integrated Science and Engineering Laboratory Facility (ISELF).

To develop the project, Gill is assembling a team of student workers and volunteers, like Araujo of Oakdale, to work in the Visualization Lab and develop the software.

The Visualization Lab offers many opportunities for the campus and St. Cloud community. Its collaborative working environment offers students a hands-on experience.

College of Science and Engineering (COSE) faculty, staff and students are working with more than 10 regional businesses.Opened in August 2013, ISELF continues to grow its offerings as a benefit to the university and the region.

For fall 2014, more than 200 students used the teaching spaces in ISELF, and more than 30 faculty and 60 research students regularly use space in ISELF. This work has already resulted in multiple publications and many professional presentations by faculty and students.

ISELF hosted the Food Microbiology conference with nearly 300 participants from around the world.

“It’s kind of a new pedagogical approach to experimentation and learning — especially in a lab-type environment,” he said.

“Everything in the lab is high performance and optimized for graphics performance,” Gill said.

Classes held in the Visualization Lab are tangible so they allow students to retain more of what they learn because they’re also experiencing it.

“(What they’re learning) they are actually doing with their hands and seeing happen in front of their eyes instead of just sitting there listening to something or reading about it,” Gill said.

He has assembled a group of students from different disciplines throughout campus who are interested in creating applications for the Visualization Lab. The students communicate through a Desire2Learn online working group, but plans are in the work for regular meetings and possibly even weekend seminars.

Since there’s no textbooks or reference materials for the type of work they’re doing, Araujo and more advanced student workers sophomores Steven Henningsgard, St. Cloud, and Alex Persian, Big Lake, are serving as mentors to the newer students.

Henningsgard and Persian spent all summer working in the lab and designing the groundwork of a collaboration with GeoComm to design software that will help 911 officers pinpoint a caller’s exact location within a campus building. Henginngsgard joined the lab in spring semester 2014, while Persian started in the summer.

Gill, Henningsgard and Persian designed the base software this summer.

“In that short amount of time I’ve gone from having just a basic understanding of programming to co-designing and engineering a piece of software that might end up being used by public safety officers all over the country,” Henningsgard said. “The cool thing about software engineering is that anyone can do just about anything they’d like. If you can dream it you can do it.”

This fall they invited St. Cloud Police Lt. James Steve ’87 into the lab to view the project and seek feedback to enhance the product.

Steve, who serves on the St. Cloud SWAT team and as an active threat trainer, looked at the project from a first responder perspective.

An active threat could be anything from a lock down, hostage situation, school shooting or a fire. It’s a situation where first responders need to know where to go and get there quickly.

“I think it’s really innovative and a great tool,” he said. “… I haven’t seen anything like this. … I think it would be a great asset to the campus community as well as the community at large.” 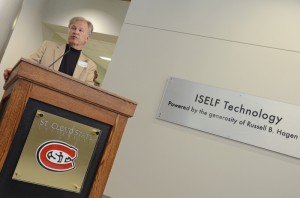 Russ Hagen ’64 speaks at the unveiling of a sign recognizing his contributions to ISELF. Hagen is founder and chairman of Data Recognition Corporation in Maple Grove and was the leading benefactor in bringing the Visualization Lab to fruition. Photo by Anna Kurth

Persian designed the user interface for the GeoComm project.

“It’s been an amazing experience.” he said in August. “I’ve been working in the lab for only about two months, and yet the amount I’ve learned has surpassed what I learned the past year through classes. I’ve also had the freedom to explore technologies and areas that I wasn’t exposed to before.”

An off-shoot of the GeoComm project is a comprehensive app being developed for Public Safety that could act as a virtual emergency blue light, Gill said.

Instead of a student in danger on campus needing to find a blue emergency light and stay there until help comes, the student could activate an emergency app that would allow Public Safety to track and find a student in need of help.

The project is also being designed to note the location of fire extinguishers and defibrillators in campus buildings for the Public Safety program, he said.

The blue light box app being developed could pinpoint your exact location during an emergency, dial 911 and record what’s happening all from a phone. That’s huge for public safety Steve said.

He is looking forward to working further with Gill and his team to give input on the application and test it.

“We’re going to give them good solid input plus they’re going to allow us to use it and put it to practical use before anyone else gets the chance to do it,” he said. “… It’s exciting. It’s great to have it developed in our back yard.”