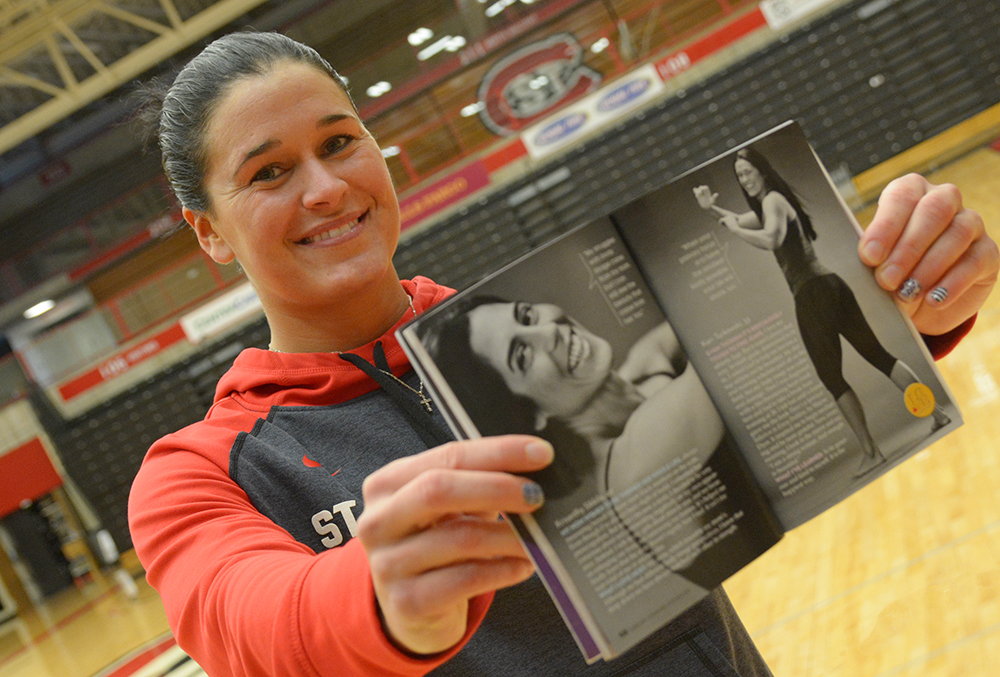 Kari Turkowski ’05 is featured in the February “Prevention” magazine spread “It’s Time to Honor Real.” Turkowski spoke about the way she loves her body and posed for a photo shoot. Photo by Anna Kurth

When she’s not applying to medical Ph.D. programs or coaching volleyball, Kari Turkowski ’05 is posing in front of a wind machine for a magazine spread.

Turkowski is one of 10 women featured in the February “Prevention” magazine spread “It’s Time to Honor Real.”

The article featured fitness and health coach Chris Freytag’s belief that women should gauge happiness on the accomplishments in their lives and not on their waistlines. “Prevention” is encouraging people to join the conversation online with the hashtag #LoveYourBody.

“I just want people to understand just to love yourself for who you are,” Turkowski said. “Everybody is going to judge themselves, but have some compassion for yourself.”

A former three-sport athlete for the Huskies, Turkowski played volleyball, hockey and track while pursuing a degree in accounting.

Turkowski responded to a request from Freytag on social media this winter asking women to share their stories about shaming their body. As a coach and former athlete, she understands that women athletes can be hard on their bodies.

She knows that first hand.

As a high school athlete she would pray to be both a top athlete and beautiful, she said in her “Prevention” quote.

She’s seen her college athletes talking negatively about their own bodies.

Today she sees strength as beautiful and shares that message with her athletes.

It took a health scare to get her to change her conception about her own body image.

Five years ago while training to be a professional beach volleyball player, Turkowski was diagnosed with a life-threatening heart condition.

“It was hard for me to be OK with not working out,” she said. “I had to learn how to love my body no matter how it was.”

“It was hard for me to be OK with not working out. I had to learn how to love my body no matter how it was.”

She got very sick and spent time in and out of the hospital. The weakness became so much she was forced to quit her job as an accountant for CliftonLarsonAllen to focus on her health.

“My whole mindset has been an athlete the entire time, and I’ve always wanted answers. And if I didn’t get them, I’d find them myself,” she said.

But her search for answers about her condition inspired a new life goal. She returned to St. Cloud State in 2011 to pursue courses in bio-medical science so she could pursue a medical degree.

She also returned to the volleyball program as an assistant coach, which gave her the chance to mentor athletes as well as help them with their skills.

“You can see a light turn on,” she said of counseling student athletes. “You know you can have an effect on who they’re becoming in a positive way.”

Turkowski is grateful for the support she’s received at St. Cloud State as she pursues her goals.

“The biomedical department is awesome. They really set the bar; dared me to be competitive,” she said. “… I’m just a firm believer it doesn’t matter where you go, if you put the time in and you work your butt off, you’re going to open doors.”

This spring she’ll get another chance to share that message on campus April 26 when she speaks at the Excellence in Leadership award banquet as the 10-year recipient honoree. She earned the Dennis Thayer Award in 2005.

Looking to the future

Now Turkowski has her heart condition under control is applying for Ph.D. programs, including one at the Mayo Clinic where she received care for her heart, and studying for the MCAT while also filing taxes once again for CliftonLarsonAllen.

She’s considering a research program focusing on arrhythmias in athletes, so that she can help athletes like her.

“I knew what it was like to have something taken away that you’ve designed yourself for your entire life,” she said, adding that knowing what’s happening from the patient’s side will make her a better doctor.

Posing for the photos for “Prevention” with a big smile on her face was a new experience for the former three-sport athlete.

“As an athlete you don’t smile and pose, you’re in the moment,” she said.

The other women involved in the photo shoot were all inspirational women, she said. In addition to Freytag, Turkowski was featured alongside a breast cancer survivor and a woman with a prosthetic leg.

After the magazine came out, one of those women posted on Facebook that Turkowski “is a beautiful strong woman,” Turkowski said, adding that friends, student athletes and others have thanked her for speaking out.

“Just understand that you should love your body the way it is,” she said. “You shouldn’t compare it to what’s always in magazines.”