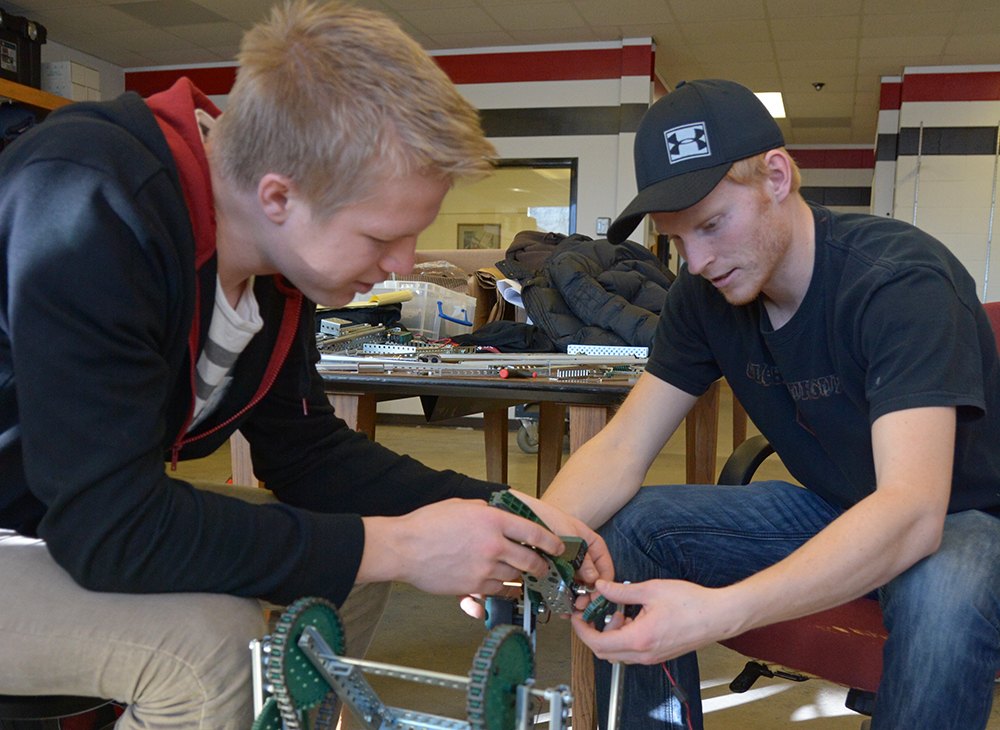 Todd Hillukka, left, and Paul Wuollet, of Husky Team 2, work on a robot for the competition. Photos by Anna Kurth

Halenbeck Hall will be filled with the cheers and lingo of a competition new to St. Cloud State when the University hosts its first robotics competition.

The university hosts a Midwest VEX U Regional Qualifier Competition Feb. 28. The St. Cloud State competition is the largest Vex U regional competition in the United States with 10 college teams coming from four states — Minnesota, Indiana and Nebraska.

Among the competitors are two Huskies teams.

In the competition, teams face off in a game of VEX Skyrise. Teams compete in alliances of two teams against a second alliance in a 12-by-12 foot field with the goal of building peg Skyrise towers and stacking colored blocks. They gain points with each peg they stack and each block they place onto a tower.

The top three finishing teams at the St. Cloud State competition will go on to the VEX World Competition April 15-18 in Louisville, Ky. There they will compete against the best robotics teams in the world — including Germany and Mexico, which currently dominate in VEX Robotics competitions, said Bob Steffen, competition organizer. 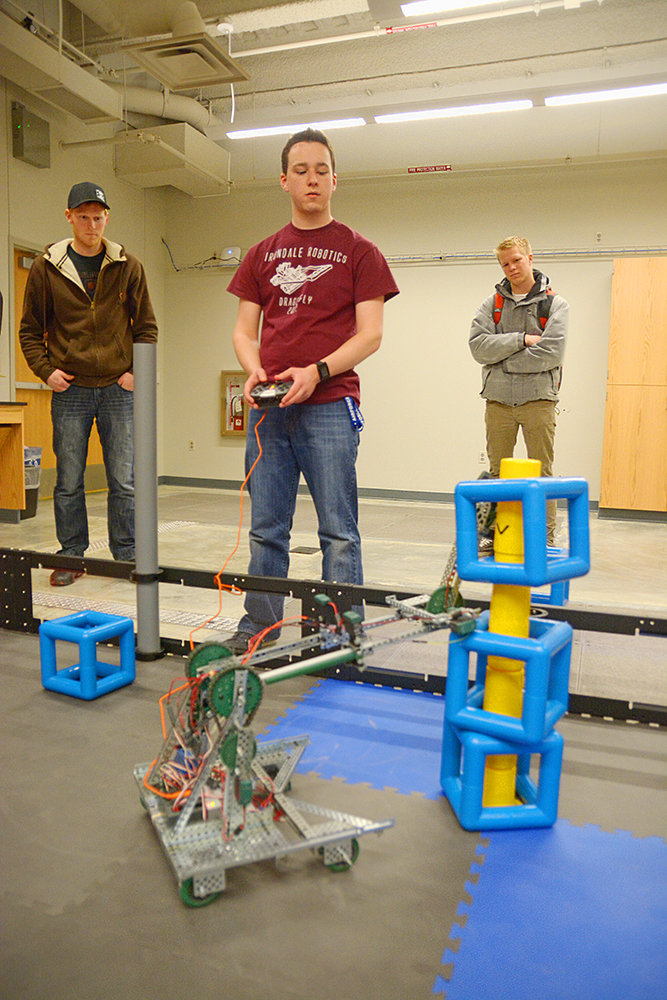 Logan Mildenberger of Husky Team 2 maneuvers a robot to put a block onto a tower of pegs as teammates Todd Hillukka and Paul Wuollet watch.

As in FIRST Robotics, each team builds two robots to use during the competition. However in VEX Robotics, robots can be built using certain VEX Robotics parts and a limited number of 3-D printed parts. Each robot must fit within certain specifications for size and number of motors used.

Teams are judged on meeting specification, programming, functionality and design.

VEX U competitors started building their robots in November.

Todd Hillukka, Buffalo, joined Husky Team 2 to make use of his programming and mechanical engineering skills.

Hillukka and Mildenberger are both electrical engineering majors, but they said anyone can participate on a robotics team.

“You can walk in knowing nothing really,” Hillukka said. “You learn more by doing, making mistakes than you do by drawing it on a whiteboard and saying ‘this will work.’”

Each match lasts 2 minutes with a 15 second autonomous period, where robots build towers and stack blocks using only their program. The autonomous period is followed by a 1:45 minute driver-run period where team members use a remote control to direct their robots around the field.

The competition begins with judging when teams arrive at 10 a.m. The opening ceremony at 10:45 a.m. kicks off qualifying matches. Final matches begin at 4 p.m. The competition ends with an awards presentation at 5:45 p.m. The entire competition is open to the public. sentences.

“You have to take your ideas and try them and what doesn’t work you change them,” he said.

Students learn robotics skills through the competition as well as how to innovate, Steffen said.

These are skills businesses are looking for and they’ll be looking at these competitors, he said.

VEX Robotics is also held at the middle and high school level.