The 2015-16 Creative Art Series features the best theater, music, film and dance St. Cloud State University students have to offer along with performances and talks by visiting artists.

The 10 events in the second-annual series are designed to expand students’ experience by introducing them to new concepts and perceptions in the School of the Arts four disciplines — art, film, theater and music. Each visiting artist offers a master class for students and a free public performance open to members of the public seeking to broaden their perspectives in the fine arts. The performances are held both on and off campus — including seven free events.

The series kicked off Sept. 9 with an opening reception and performance of “Not so Alone” by world-renowned cellist Pablo Mahave-Veglia. The performance features a recital of works for solo cello, electronics and video with works by Bach, Bill Ryan, Edgardo Cantón and Andrés Alcalde. The performance concludes a two-day visit by the artist, which includes a master class and a Sept. 8 recital of chamber music in collaboration with St. Cloud State string faculty.

The Creative Art Series also includes a visit by filmmaker Godfrey Reggio, creator of the “Quatsi” trilogy, theater a performance by solo artist Tim Miller whose works explore his identity as a gay man, Estonian music by Ensemble U and a show by Canadian visual artists Seripop.

Student offerings include the popular Music at St. Mary’s, Her Story, Her Song, the Student Film Festival and the 50th annual Juried Student Art Exhibition. Theater students will put on a performance of the classic 1960s rock musical “Hair,” directed by Professor Jeffrey Bleam. The musical tells the story of a “tribe” of hippies and their reaction to one among them being drafted.

The series continues to build on the success of the inaugural year of the Creative Art Series, said Raymond Philippot, associate dean and executive director of the School of the Arts.

“Our goal remains to highlight accomplished artists — both those who are external to St. Cloud State as well as those who are our faculty,” he said. “We look forward to an eclectic range of artistic presentations.”

About the Creative Art Series 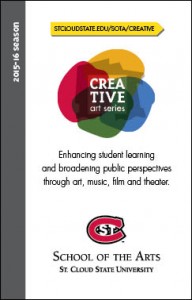 The Creative Arts Series grew out of a desire for faculty within the School to establish a shared identity across the disciplines.

Now in its second year, the series showcases each program in the School through performances and exhibitions of student work, as well as established artists who not only demonstrate their craft, but also work directly with student groups.

With a goal of creating a sense of belonging for our students, faculty, and staff serving our community, the series strives to create an identity for the School of the Arts by bringing a variety of artistic voices to St. Cloud. The involvement of the community is an important aspect of an arts education in order to broaden the student experience.