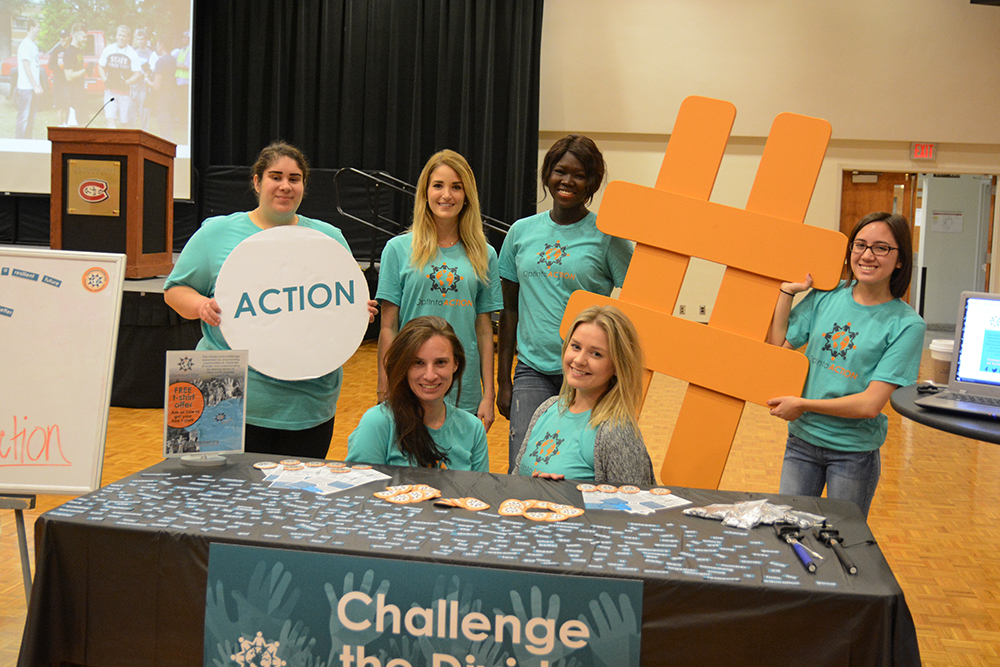 A class of St. Cloud State University students are doing their part to combat violent extremism with the launch of OptIntoAction, a student-led campaign encouraging active participation toward a united community.

Twelve students designed the campaign as part of Linda Butenhoff’s combating violent extremism through social media political science class. The students come from diverse cultural backgrounds and have worked together to gather stories from community members. The campaign is targeting individuals ages 11 to 36.

“The students designed it all,” she said. “It’s all their creativity.”

The group is committed to tackling violent extremism online through education, conversation, information and connection to offer a positive alternative for the future so that no one feels isolated from their community, said Landry Kabore, OptIntoAction’s public relations campaign manager.

OptIntoAction runs a website, YouTube channel and social media accounts on Facebook, Twitter and Instagram to share videos of the stories that spread the vision of a future without violent extremism. The students are also gauged the public on the sense of community, trust and acceptance in Central Minnesota through an online survey.

They developed the campaign after six weeks of research, which included a look at work being done by the Community Anti-Racism Education Initiative on campus, The Boys and Girls Club, District 742 and Unitecloud and hearing from guest speakers on campus and in the community.

“The students designed it all. It’s all their creativity.”
— Linda Buttenhoff, professor

To combat alienation and discrimination, OptIntoAction aims to build a sense of community, trust, empathy and cohesion through discussion building, positive stories and role models, he said.

The students worked to share their message with the community through kiosk locations on campus and participating in Passport to the World, a cultural sharing event on campus.

They are working with children from the Boys and Girls Club of Central Minnesota to design a game as a way of building community, Butenhoff said.

The campaign is part of the Peer 2 Peer: Challenging Extremism, an initiative by Facebook and the U.S. Department of State to engage university students from throughout the world to develop and execute campaigns and social media strategies against extremism that resonate with their peers and communities.

The challenge gave the students a $2,000 budget to run their campaign and $400 in Facebook ad credits to fund the campaign.

OptIntoAction earned honorable mention in the Peer2Peer competition and was invited to share their work in Washington D.C. in February for their efforts.