A month before her December 2016 graduation alumna Brynne Rist was already putting her criminal justice skills to work on South Dakota highways.

Rist is a trooper with the South Dakota Highway Patrol. Her first day was Nov. 21.

“I really enjoy helping others especially in times of need. I’m always willing to lend a helping hand and I hope to make a difference in my community,” she said. “I want to show the public that I am there to serve them.”

The Brandon, South Dakota native graduated a semester early this December with a criminal justice major and psychology minor.

When she earned her job offer, Rist worked with her professors to complete her coursework early.

“I am proud to be graduating in three-and-a-half years,” she said. “I am also very excited that I received and accepted a job offer and began working in my career field before even graduating from college.” 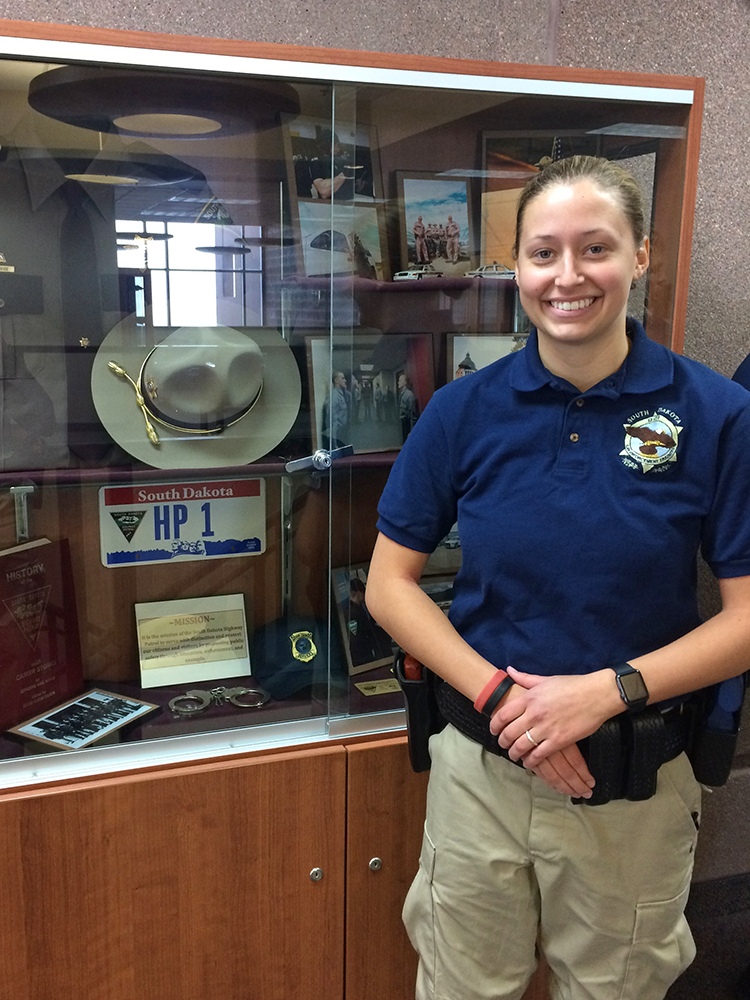 She’s not the only one who’s proud, her interview and interrogation professor Stephen Wirth praised Rist for her initiative.

“Brynne completed her final exam and research paper early and in fine form,” Wirth said. “She will do an excellent job for South Dakota citizens as a state trooper. My final assignments for her were — ‘pay it forward to the best of your ability, be careful out there and stay in touch.’”

Rist was drawn to criminal justice out of an interest, but once she started taking classes she knew she had found her passion and wanted to make it her career.

Her introduction to the highway patrol came during a summer 2015 internship.

“I absolutely loved it and felt that the values of the agency fit well with my own core values,” she said.

Beyond the internship, Rist said it was her professors at St. Cloud State University who prepared her most for a career in law enforcement.

“I had many phenomenal professors who were always willing to answer any questions I had,” she said. “The context I was given from adjunct professors helped me gain a better understanding of the job because of their real-life experiences that could be used for examples.”

Her goal is to one day specialize in crash reconstruction or drug interdiction and become a mentor to younger troopers and officers.

« Rotaract: A club for the next generation of leaders
Harlander presents about near-space weather device »