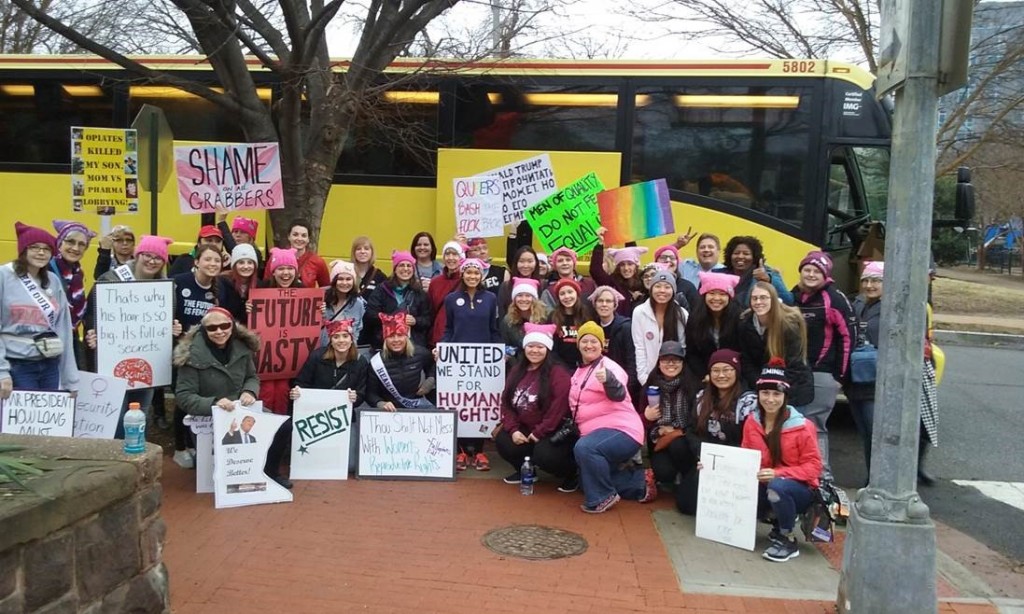 Participants who rode the St. Cloud bus to the Jan. 21 Women’s March on Washington.

The Women on Wednesday (WOW) speaker series takes on greater significance as organizers draw on their participation in the historic Women’s March Jan. 21 in Washington D.C.

The spring semester series begins with a panel discussion on the power, potential and practice of feminism noon Feb. 8 in the theater of Atwood Memorial Center.

Seven other presentations, under the rubric “Reigniting the Feminist Fight,” will be announced later this month, including a Feb. 15 conversation by local march participants.

The Feb. 8 panelists are:

Jane Olsen, director of the Women’s Center, organized a bus from St. Cloud State that traveled to the capital and back in 58 hours. It was one of eight buses that originated in Minnesota. A $6,355 private campaign funded the bus and driver.

Olsen said she marched because she lives in a world that is neither respectful, safe nor equal.

“We all saw that everybody was coming together for the same purpose, to demonstrate a message that we will not go back. That women’s rights are human rights,” she said. “That feminism is intersectional.”

Panel participant Beth Berila, professor in the Department of Ethnic and Women’s Studies.

One of Olsen’s key takeaways from the march was intersectionality: The overlapping issues that center on oppression, domination and discrimination. Olsen said the protestors’s signs covered a wide range of issues within the feminist struggle, including immigration reform, assault, climate change, reproductive rights, equal pay and religious discrimination.

“We understand the importance of having allies in the work that we do,” she said.

Women’s Center graduate assistant Carly Puch participated in the Washington march. She was one of 28 St. Cloud State students on the bus, which was named for Rep. Ilhan Omar, the first Somali-American elected to the Minnesota Legislature.

Puch discussed her participation in a blog post, which, in part, defended the march. Said Puch: “Do not confuse critique with disrespect. If you truly love something you are willing to point to its flaws and expect better.”

The march’s mission statement: “We stand together in solidarity with our partners and children for the protection of our rights, our safety, our health, and our families – recognizing that our vibrant and diverse communities are the strength of our country.”

A Grand Marais native, Puch is pursuing a master’s degree in social responsibility. She said “being a part of that moment in history was a reminder that we are not alone.”

Organized each semester by the Women’s Center, WOW features women addressing political, economic, social and personal issues that impact the status of women.