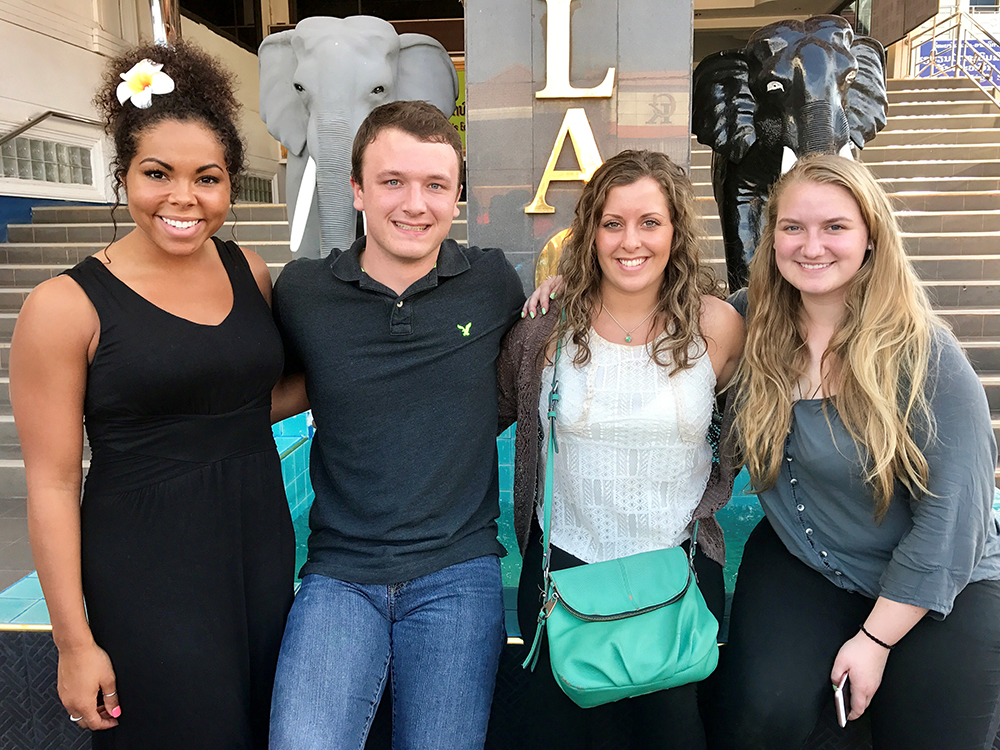 It took a trip across the world to forge a friendship between four Sauk Rapids-Rice High School graduates attending St. Cloud State University together.

Kayela Steiner, Michael Cariveau, Elena Mrozek and Kailyn Anderson all graduated from the St. Cloud area high school but were not all connected as friends until they took a trip together to Malaysia, Thailand and Laos together during fall semester 2016.

Anderson, Steiner and Mrozek graduated together with Cariveau’s sister, but Steiner said she wasn’t close to her classmates and she never knew Cariveau.

“They were friends, but we weren’t in the same friend group,” she said. “Going on the trip with them, we discovered that we wish we would have been friends in high school.”

Anderson was friends with Cariveau and Mrozek before the Southeast Asia trip.

She and Cariveau studied together on a short-term trip to South Africa the previous year and enjoyed the experience of exploring a new culture together.

“Studying abroad in South Africa was my first study abroad trip,” Cariveau said. “It taught me how to travel independently in combination with enhancing my college experience.”

The trip exposed him to a new appreciation for the United States and a different way of life.

Steiner, who studied abroad in South Africa separately on a short-term and semester-long basis found a deeper connection with the African nation.

“Going to South Africa it felt like I was going home,” said Steiner, who has ancestors from Africa.

She enjoyed the chance to blend in and connect with her personal history on her trips. It’s an experience she saw her Asian classmates go through on the trip to Southeast Asia.

“Some of them had family members that they were going to meet for the first time or going to reconnect with, and I feel what they experienced was what I experienced in South Africa — that feeling of home,” she said.

“Going with people that I previously traveled with created a group rapport that allowed us to really enjoy the destinations to their fullest.”

The trip gave Steiner an understanding of Asian history as well as her own nation’s historical interactions with the region.

Cariveau said the trip gave him a look at the diversity that exists in Southeast Asia and the different standards of living that people experience throughout the world.

“I learned how much we take simple things in the United States for granted,” he said. “When seeing the living conditions of some people, it makes you wonder how they are able to navigate their daily lives.”

He added that sharing the experience with people he studied with in South Africa was a bonus.

“Going with people that I previously traveled with created a group rapport that allowed us to really enjoy the destinations to their fullest,” he said. “We share many of the same passions for new experiences, thrills and cultures.”

Steiner said those perspectives are shaped differently by traveling on a short-term basis versus a whole semester abroad.

When students go on a short-term study abroad trip, they take a class during the semester on campus to prepare for the trip with an overview of the regions history and culture. Then you go on the trip for two to four weeks and see both tourist sites and visit villages and interact with the people in that country, Steiner said.

“We get to see how they live their lives, and it’s more than just being a tourist,” she said.

Alternatively, when you study abroad for a whole semester you take classes just as you would at St. Cloud State but you do so immersed in the country where you are studying, Steiner said, adding that in her case it was at a university where it was across from the beach.

“It was nice being in a different area and still doing college and school and meeting people from different areas around the world,” she said.

« Big Lake student leverages PSEO to get ahead
St. Cloud State is comm studies student’s gateway to the world »