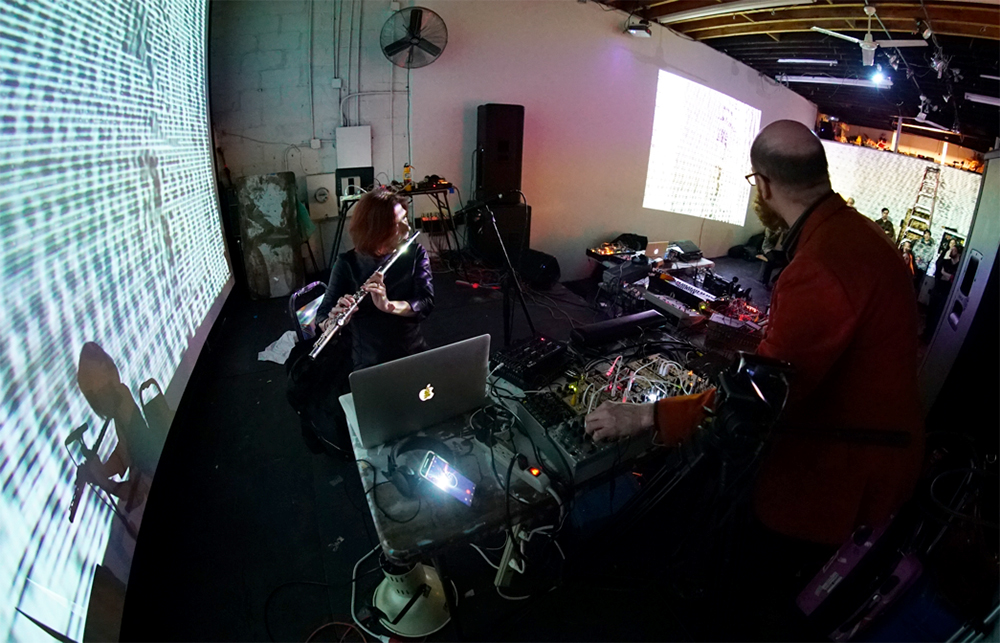 The exhibition brings together performance and multi-channel audiovisual installation in a two-part exhibition.

A live improvised performance with acoustic flute, synthesized and processed sound and live analog video opens the exhibition 4-6 p.m. March 20 in the Kiehle Gallery. Footage of the performance is then gradually transformed through the course of the exhibition into a continuously-changing installation by processing recorded data of the artists’ gestures during the performance with custom code and analog electronics. The exhibit runs through April 7. Kiehle Gallery is open 9 a.m.-4 p.m. Monday-Friday.

Held is a classically trained flutist and composer who lives and works in Barcelona, Spain. She has commissioned and performed a very personal body of new repertoire for flute by Spanish and American composers.

Bainbridge is an artist who makes media art with his own custom systems. He is best known for visual performances, solo and in diverse collaborations.

In addition to the exhibition opening, Held will perform a solo concert of her historical repertoire on flute and prepared devices, accompanied by a discussion on her work at 4 p.m. March 22 in the Performing Arts Center’s Ruth Gant Recital Hall.

Assistant professor of art history Godfre Leung will give a critical introduction to the March 22 program.

The “Pausa” installation is part of the School of the Arts’ 2016-17 Creative Art Series. The 11 events in the third-annual series are designed to expand students’ experiences and the public’s perspectives by introducing them to new concepts and perceptions in the School of the Arts four disciplines — art, film, theater and music.