St. Cloud State University’s 50th annual Math Contest saw more than 1,700 students from across Central Minnesota and Wisconsin on campus to compete in the one day event April 6. But it was one student who wanted to take the math test like her peers, but needed a little help.

“This is something we’ve never dealt with (at the Math Contest), so it took us some time to figure out how to handle it,” said Michael Ernst, professor of statistics.

Anja Swenson, a blind eighth-grader from John Glenn Middle School in Maplewood, was eager to feel included among her peers and participate in the day’s events.

St. Cloud State’s Department of Mathematics and Statistics, and Student Disability Services (SDS) worked together to determine Anja’s needs. Since she was used to taking exams in braille, SDS reached out to State Services for the Blind to find out if they could convert the exam to braille. 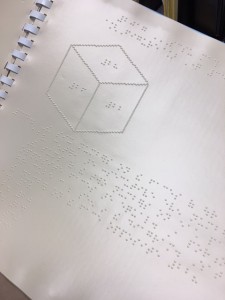 A page of the braille version of the Math Contest exam. Submitted photo

It not only turned out that they could, but since Anja’s school already uses their service, they did it at no cost. They also brailled a practice exam for her.

“The exam itself is rather interesting,” Ernst said. “It’s basically a small book.”

On the day of the exam, Anja was escorted to SDS and was given the braille exam and a scribe who filled in her answers on a scantron form.

“I read the test questions in braille and was able to use a talking calculator and my braille sense to use as scratch paper,” Anja said. “It meant a lot to me that St. Cloud State provided the braille version.”

When the exam was done, Anja was escorted to walk around and explore campus.

“I enjoyed exploring campus,” Anja said. “I especially thought the rock climbing center was cool and would like to take advantage of it if I come back.”

We want this activity to be educational and inclusive, and we want students to feel welcome when they are on campus, Ernst said.

Communication was key in the planning for the accommodations of the braille exam and the faculty and staff that made it possible.

“Just like anything you do for the first time, there was a definite learning curve in figuring out how to accommodate Anja. It was deeply satisfying to be able to include Anja in something that many of her peers were participating in,” Ernst added. “We are in a much better position now, should she return next year, or if we were to have another blind student (take the test) in the future.”

“If the opportunity is provided by my school, I plan on being back,” Anja said.