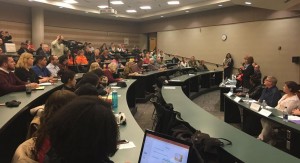 Participants at the wage-theft roundtable April 26 at the Carlson School of Management, Minneapolis. Photo courtesy of the Centro de Trabajadores Unidos en Lucha/Center for Workers United in Struggle.

The sociology major from McHenry, Illinois, participated in an April 26 wage-theft roundtable hosted by the University of Minnesota Labor Education Service and moderated by Lt. Gov. Tina Smith.

The event focused attention on employer wage theft in industries such as retail cleaning, home healthcare and construction. Rep. Tim Mahoney (DFL St. Paul) discussed a bill before the Legislature that would, among other things, define wage theft as a crime and fund more investigations. Also in attendance was Sen. Dan Schoen ( DFL St. Paul Park), an author of the Senate version of the bill.

One wage-theft scenario: A worker is persuaded to labor on a holiday with an offer of time-and-a-half pay. When the paycheck arrives, the additional compensation is missing.

Herne is focusing her studies on critical applied sociology. Her minor is rhetorical writing.