Irena Jovanovska ’16 is making a name for herself in New Jersey as an electrical engineer.

Jovanovska is employed at Concord Engineering, where she designs power distribution systems, works on control systems for lighting and HVAC systems and performs load demand and short-circuit analysis.

In addition to her career, Jovanovska is a member of the collegiate committee of the Society of Women Engineers (SWE). She is active in the New Jersey Chapter where she interacts with and advises SWE collegiate sections across New Jersey. SWE is a non-profit organization that advocates, educates, and supports professional and collegiate women in STEM fields around the world.

Jovanovska’s commitment to giving back could be seen from her earliest time at St. Cloud State when she served as public relations chair of Shoemaker’s Hall Community Council her freshman year and was later a promoter of diversity and inclusiveness while serving as a community advisor in the residential hall. 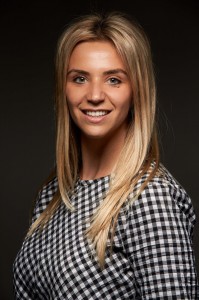 She was also a promoter of diversity and inclusiveness as a community advisor in Shoemaker Hall. She established a strong and positive environment that helped residents grow in not only their education but their community as well.

In her junior year, the electrical engineering major was elected president of the St. Cloud State chapter of SWE. In her presidential role, Jovanovska held bi-weekly meetings and organized outreach events for girls in junior-high. She also attended many SWE national conferences. Her position in SWE showed Jovanovska that she has the ability to be an outstanding leader as well as allowing her to expand her professional network. Now she is giving back through he work with the SWE Chapters in New Jersey.

Over the years, Jovanovska has won countless awards for her strong leadership, including the Xcel Energy Power Scholarship in Electrical Engineering.

« Wish You Were Here: Karina Kern sings her way out of the dark following her mother’s death
VIDEO: New scholarship at NHCC highlights STEM »

One thought on “Fresh Success: Engineering grad gives back in her field”