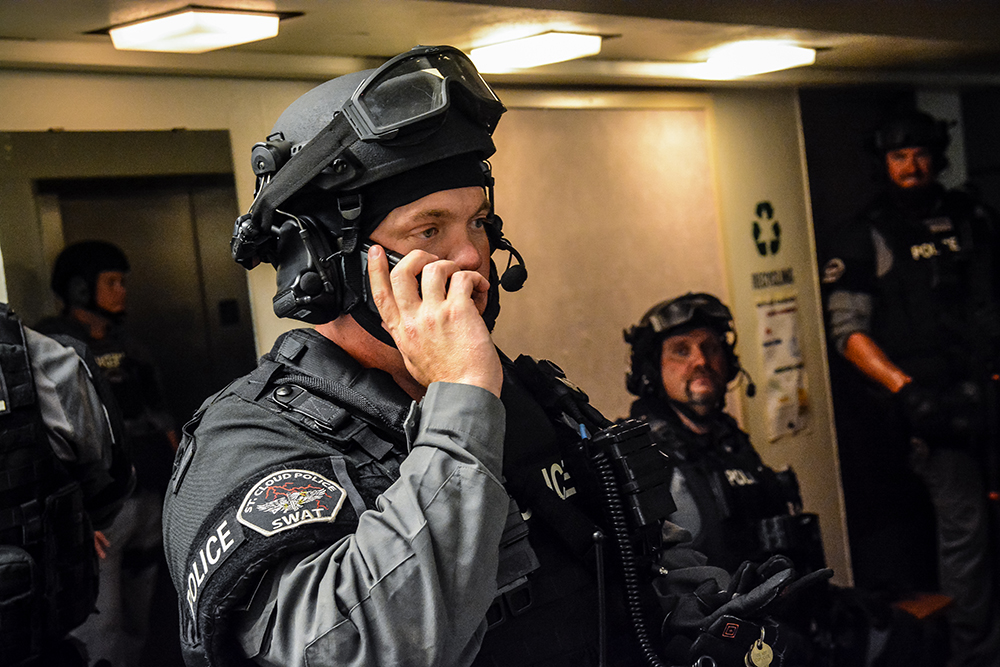 Sgt. Lucas Dingman ’03 of the St. Cloud Police SWAT Team awaits instruction as he readies his team inside Stearns Hall to storm a dorm room.

A call came over the scanner. “There has been an explosion in Atwood Memorial Center on the St. Cloud State University campus.”

Within minutes, police mobilized the scene and secured the perimeter ready to assess the situation, identify and arrest the suspect and provide aid to victims.

Luckily, this was a drill, but it was helping St. Cloud State and the region prepare for an actual large-scale emergency.

“The St. Cloud community is better prepared and has built even better relationships because of this exercise.”
– Jennifer Furan Super ’98 ’00 ’03
A true complex community exercise, St. Cloud State’s Full-Scale Emergency Exercise in July included 19 local agencies and more than 400 participants with several different components operating simultaneously to train and better prepare the local community for an actual campus-wide emergency.

“The exercise relied on a community response to a large-scale situation,” said Jeffrey Oxton ’98, assistant chief of the St. Cloud Police Department. “Practicing and simulating events like this are crucial to ensuring our response to actual large-scale incidents and ensuring we are providing the best public safety possible.”

The exercise took place on campus with two different scenarios. The first was an improvised explosive device (IED) explosion in Atwood Memorial Center. The second included a hostage situation in the Integrated Science and Engineering Laboratory Facility. A third location in the exercise led investigators to Stearns Hall where the police department’s SWAT and Bomb squads found IED materials and a homicide inside a dorm room. 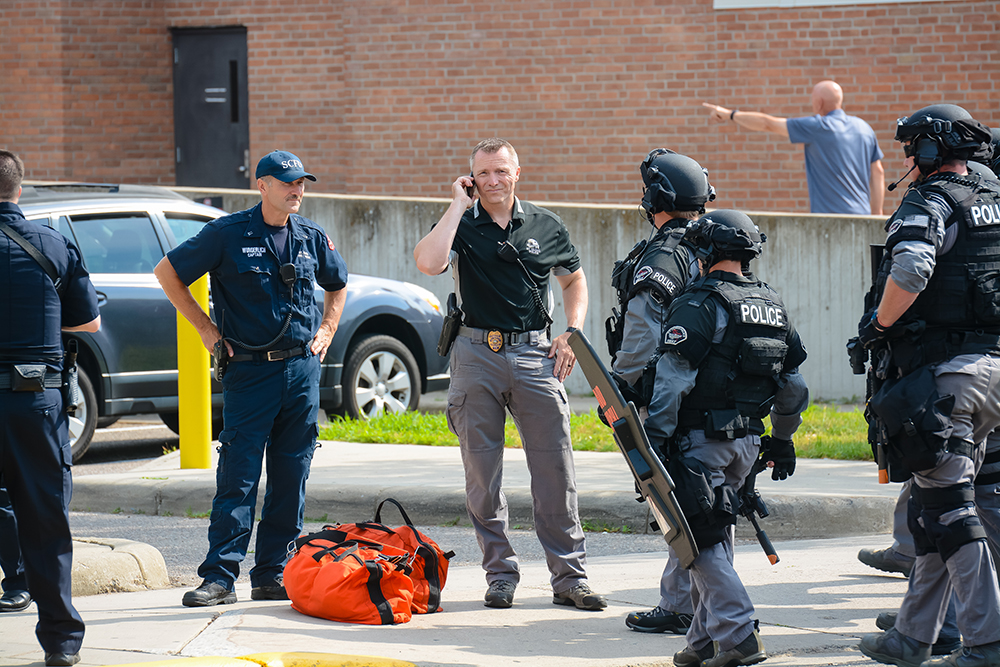 Sgt. Jesse Douvier ’97 of the St. Cloud Police SWAT Team gives direction from the ground level as he prepares his team for the training exercise.

The day was successful before it began thanks to collaborations between departments in planning and the commitment from all participating agencies.

“Seeing what this community is capable of when we work together demonstrates the utmost value in community partnerships.”
– Interim President Ashish Vaidya
During the exercise, public information officers from the agencies monitored simulated social media channels to help control, assess and provide updates as they became available.

“The St. Cloud area is fortunate to have like-minded organizations that have made dedicated efforts to work together and place public safety as the highest priority,” Oxton said. “The event was extremely successful, ultimately demonstrating the extreme value in organizations coming together to train, collaborate and learn about the resources available during a large-scale emergency.”

Though the main situations were on the St. Cloud State campus, the St. Cloud Hospital played a large role receiving victims from the scene. CentraCare-Monticello provided ambulance transport in support of Gold Cross.

A steady stream of volunteer victims arrived at the hospital’s Emergency Trauma Center where they were cared for throughout the hospital. 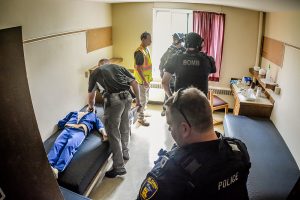 Police of officers and the Bomb Squad find IED materials and a dummy homicide inside a dorm room.

“All patient care departments and the majority of support departments participated in the exercise,” Mockros said. “Each department determined how many staff were needed to participate to assure the exercise would be played to its fullest extent while continuing day-to-day business.”

The exercise highlighted the importance of community relationships between St. Cloud State and responding and supporting agencies in the region.

“ The St. Cloud community is better prepared and has built even better relationships because of this exercise,” said Jennifer Furan Super, associate director of Public Safety at St. Cloud State.

“St. Cloud State is far better prepared for an actual emergency than we were just a few years ago. However, we still have things to learn and practice.”

St. Cloud State is committed to providing a safe and secure environment for its students, employees and guests. The safety of campus is a top priority, said St. Cloud State Interim President Ashish Vaidya.

“Seeing what this community is capable of when we work together demonstrates the utmost value in community partnerships,” Vaidya said. “ There were lessons learned in all aspects of the exercise that we will continue to improve on, but the level of communication and cooperation between agencies was defnitely a success.”

Representatives from 14 colleges and universities from around Minnesota observed the event.