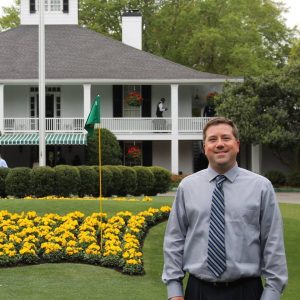 Brad Nelson ’04 on the prestigious grounds of the 2018 Masters Tournament in Augusta, Ga.

For most people, the dream of attending the Masters Tournament is a once-in-a-lifetime opportunity. However, for St. Cloud State University alumnus Brad Nelson ’04, his dream of attending Augusta came true when he was hired as a meteorologist by the Professional Golf Association Tour back in 2007 to manage the weather forecasts for their golf tournaments.

“Our main role as on-site meteorologists is for safety,” said Nelson, who majored in meteorology at St. Cloud State with a minor in environmental studies. “Our crew monitors for any inclement weather; such as high winds, heavy rain, thunderstorms and especially for any threat of lightning.”

Currently employed by DTN, an independent and innovative company based in Minneapolis, Nelson mentioned that lightning is the main weather concern for PGA tournaments.  “We will typically give the officials as much lead time as possible for any lightning or inclement weather, so that the course evacuation procedures can be implemented. Our weather forecasts and consultation also assist in tournament planning and logistics, as well as golf course set up.”

Nelson and his crew finalized their on-site weather forecasts for the recently completed 82nd edition of the Masters Tournament in Augusta, Georgia, which was won by Patrick Reed.

“St. Cloud State’s meteorology program is excellent and one of the best in the country.”

When asked how his meteorology experiences at the University prepared him for the professional world, Nelson stated, “St. Cloud State’s meteorology program is excellent and one of the best in the country.  Operational forecasting is a major focus of the St. Cloud State program, and that has certainly prepared me for the professional world of private sector meteorology with DTN.  The professors at the University challenged me to produce weather forecasts, communicate why certain weather was occurring and how it occurs in the first place. Combined, these skill sets have been essential as an on-site meteorologist for golf and other large events.” 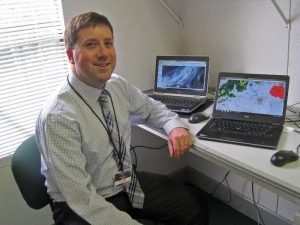 Nelson ’04 in action at the Weather Office inside the PGA Tournament Administration building.

Fortunate to have countless memories related to the PGA Tour, Nelson recalls one of his most favorite memories from the 2017 Colonial Tournament in Fort Worth, Texas.

“I was invited inside the ropes during the Pro-Am to walk with Jordan Spieth and Bill Murray as they played through their round.  It was a very fun experience to interact with them, and to hear all of Bill Murray’s jokes and exchanges with the crowd.”

During his stint at the University from 1999-2004, Nelson never could’ve imaged that mastering his meteorology skills on campus would lead him on a path to the esteemed Masters Tournament. For Nelson, his dreams have come true, all in thanks to the preparation by St. Cloud State.