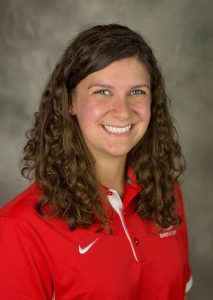 Weiland, who earned her master’s degree in college counseling and community psychology from St. Cloud State, served as the assistant men’s and women’s swimming coach at St. Cloud State from 2015-2017. Weiland oversaw more than 70 student-athletes on SCSU’s men’s and women’s swimming and diving teams while with the Huskies, eventually leading to a Northern Sun Intercollegiate Conference Championship title in 2017. Additionally, Weiland was with the Huskies while they broke 14 school records and one NSIC record, while eight female student-athletes qualified and competed at the NCAA DII Swimming and Diving National Championships in 2017.

In March of 2017, Weiland was selected as a recipient of the College Swimming Coaches Association of America’s (CSCAA) Jean Freeman Scholarship, an award for “exceptional contributions” by assistant coaches to emphasize “leadership, integrity, honesty, competitive attitude and personal graciousness.”