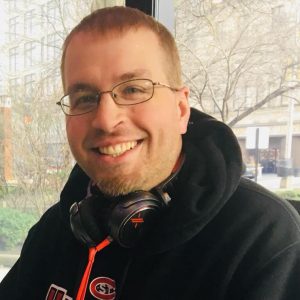 Birnell, who majored in mass communications with a concentration in news editorial-print journalism and minored in athletic coaching, says his preparation at St. Cloud State University paved the way for his successful career.

“I knew I wanted to be a sports reporter after graduating high school. The journalism program and the student newspaper were my deciding factors to attend St. Cloud State.”

Birnell was sports editor of the University Chronicle student newspaper during the 2004-05 academic year.

“The opportunities afforded to me as a college sports reporter helped broaden and sharpen my writing and reporting skills while covering a variety of St. Cloud State’s athletic teams.”

“Without hesitation, my favorite professor and advisor was Mike Vadnie. He is one of the best teachers that I’ve ever had.”

Vadnie, who advised the University Chronicle for many years, taught a sports-writing class. “He (Vadnie) is incredibly knowledgeable and engaging, with a great sense of humor I might add. He genuinely cared for his students and was always willing to help his students improve.”

Birnell said his writing experiences with the University Chronicle led to professional opportunities with the St. Cloud Times sports department and his current position covering the Utica Comets in the American Hockey League.

Birnell provides readers with above-and-beyond coverage of the Comets and the American Hockey League, routinely seeking stories on-ice and off-ice stories about the organization. His stories give the club a regular presence on the pages of the Observer-Dispatch. He also does frequent team and league updates on Twitter (@OD_Comets).

Most notably, Birnell led the extensive coverage of the 2018 AHL All-Star Classic in Utica, as well as the renovation projects at the historic Adirondack Bank Center arena.

In operation since 1936, the AHL serves as the top development league for all 31 National Hockey League teams. More than 88 percent of today’s NHL players are American Hockey League graduates. More than 100 members of the Hockey Hall of Fame skated in the AHL.

“I have so many great memories from my time at St. Cloud State,” said Birnell. “My top memory is from the year I was sports editor for the University Chronicle. I determined it would be interesting to pick athletes for specific awards, including Female and Male Athletes of the Year. My original idea was trivial, but with help from other Chronicle staff, the initiative grew into a special section, which included feature stories and stellar pictures of each of the award-winning athletes. I was proud with the way that section turned out.”

The James H. Ellery Memorial Award annually honors outstanding media coverage of the American Hockey League. First presented in 1964-65, it honors the late Jim Ellery, who served the AHL for 17 years as league secretary and publicity director until his death in 1964.