Husky Productions (HP) will be honored with a first-place award at the Broadcast Education Association (BEA) convention April 6-9 in Las Vegas.

That award is among seven earned by St. Cloud State broadcasters.

The HP crew, led by students Greg Spaeth, Ashley Pierson and Madison Golden, is recognized for a December 2018 broadcast of a men’s Huskies Hockey game. Spaeth, Maple Grove, is the producer. Pierson, Appleton, Wisconsin, is the director. Golden, Parker, Colorado, is the associate producer. They are mass communications majors.

KVSC 88.1 FM, led by operations director Jim Gray ’03 ’05, earned an Award of Excellence in long-form audio production. The award is for the Oct. 27 live broadcast (.mp3) of an adaptation of the George Romero film Night of the Living Dead. The campus radio station teamed with GREAT Theatre on the broadcast, which was presented at the Helgeson Learning Lab Theatre in Waite Park.

The BEA’s Festival of Media Arts is a refereed exhibition of faculty creative activities and a showcase for student work. Awards will be presented April 8.

Award winners are among more than 1,500 entries from more than 300 participating schools.

In the BEA’s hierarchy of honors, Best of Festival is the top award. Husky Productions earned that honor in 2015, 2013 and 2011. UTVS News earned a Best of Festival in 2016. First-, second- and third-place awards are typically awarded in each category. Award of Excellence is the BEA’s version of an honorable mention. 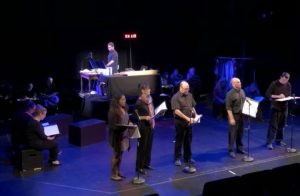 “Night of the Living Dead,” an award-winning, radio-theater collaboration by KVSC 88.1 FM and GREAT Theatre.

Award of Excellence
Jim Gray
Night of The Living Dead