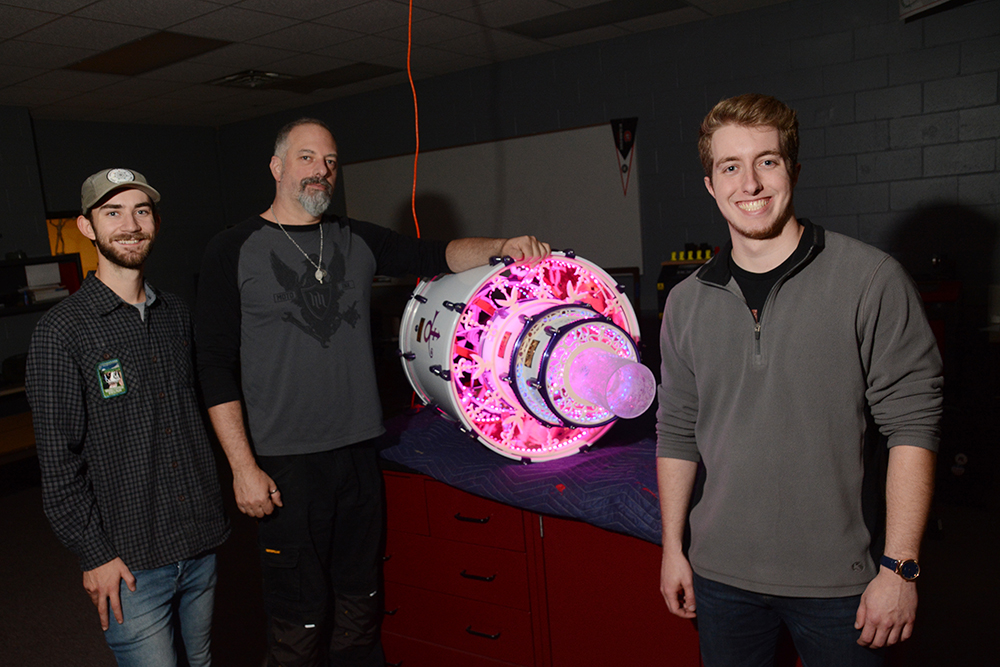 Purple lights shine through and the gold sparkles in the light.

What was once a drum kit is now a show piece chandelier. The piece is made from Prince’s personal drum kit — one that he played while on tour.

When you look closely, you can see symbols. Each symbol is a nod to Prince’s life and music. Each symbol was printed or etched in the Make It Space in St. Cloud State University’s Headley Hall.

Manufacturing Engineering Technology major Kyle Cielinski teamed up this summer with artist Duff Eisenschenk, who was commissioned to make the drum kit into a work of art by a friend of Prince who was gifted the drum kit after the artist’s death.

The owner, himself a musician, didn’t want the instrument to be played by anyone else and instead wanted to display it in a place of honor in his home.

Eisenshenck was determined to make the drum kit into a chandelier worthy of Prince.

He took the drum kit apart and stacked it into a chandelier. He wanted to incorporate Prince’s symbols into the spaces left by the drumheads.

That’s where Cielinski came in.

Eisenschenck and Cielinski worked together all summer to develop the intricate designs for inside the drum heads.

They would work together on a flat image of the pieces that Cielinski then uploaded into Autodesk Inventor and hand traced the edges before turning it into a 3D design he could manipulate and then print in plastic.

“We made them all custom designs,” Cielinski said. “We did a lot of research and brainstorming about how to make them detailed and intricate with respect to Prince.”

An important aspect of the project for both the client and Eisenschenk is that the drum itself has not lost integrity.

Not one hold has been drilled. You could take it apart, put new heads on and play it on a recording, he said. 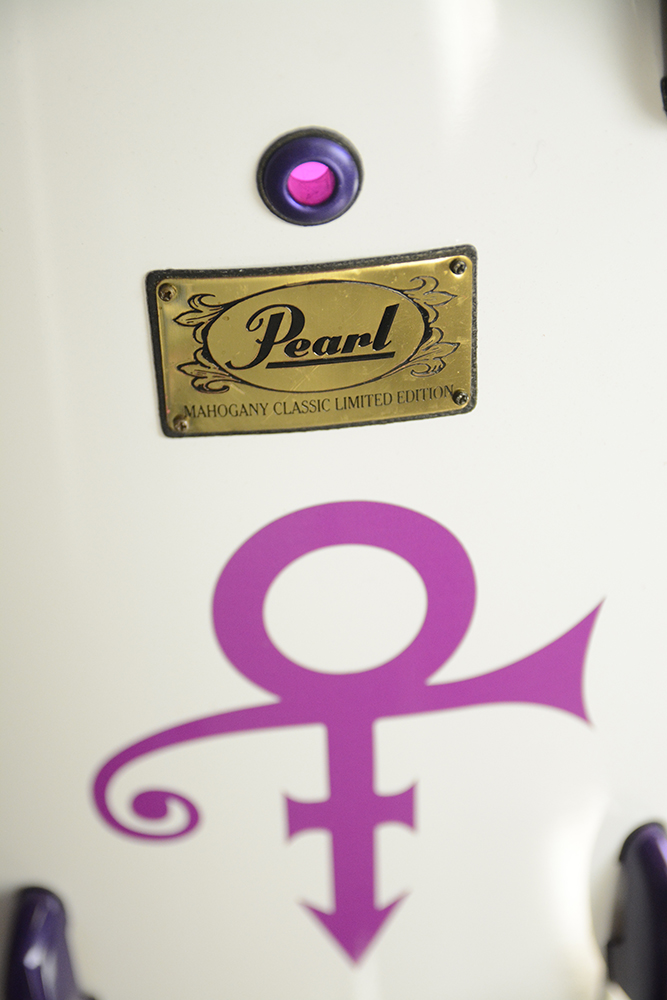 The drum kit is a Pearl and was once played by Prince on tour.

The symbols in the design come from Prince’s albums from throughout his career along with his name symbol. There is the peace symbol from “The Sign of the Times” tour, a dove for “When the Doves Cry”, lace to replicate lace from his outfits and others.

“All of the inner circle of Prince’s friends and family are going to see this thing,” Cielinski said. “We want them to see that every detail was thought of and was respectful of Prince.”

Eisenschenck believes Prince himself would have been pleased with the finished product.

“I think he’d love it,” he said. “That’s probably the most rewarding part of all of it — knowing that I think he’d be thrilled with what we did with this.”

When Cielinski finished the pieces he turned them over to Eisenschenck who included them in the chandelier as he constructed it. Cielinski also printed acrylic tubes to hang out of the drumheads and etched additional symbols into the clear plastic. Technology education major Sam Joyce helped with the design of a piece for an additional lamp made from the kit’s snare drum in Adobe Illustrator, which Cielinski then etched onto the acrylic.

The project allowed Cielinski to use Autodesk Inventor, a 3D printing software designed for making fixtures, tubes and other industrial pieces in a new way.

The technology wasn’t designed for artistic, detailed work, so it took a lot of care and trying new ways of working, Cielinski said.

“I’m learning what it can do,” he said of the software. “It’s helped my mind in a creative way knowing how it works and just seeing first-hand what it can do makes my mind go into overdrive about other things that could be done.”

For Eisenschenck working with Cielinski has been a lesson in what 3D printing can do as well.

“This technology has really opened up a lot of doors,” he said.

The detail in the pieces Cielinksi has printed is unbelievable and each symbol is uniform. It would take much longer to create that same level of detail with metal or woodcarving and it would never be that uniform, he said.

“You can’t make anything like this out of anything else,” he said. “It would take years to make something this precise.”

As impressed as Eisenshenck is with the possibilities 3D printing have to offer, he’s even more impressed with Cielinski’s attention to detail and willingness to experiment and find ways to  understand his vision and suggest ways to make it even better.

“He’s been really creative and come up with great ideas, and his work — it’s unbelievable,” Eisenschenck said. “Nobody has done anything like this to my knowledge using this technology to make a custom piece like this.”

Engineering is a rigid field that requires tight timelines and structured designs. Working on this project Cielinski said he liked the opportunity to be flexible and creative in his designs.

He’s also enjoying that the work that he’s doing in the Make It Space will live on off campus.

“These machines can do a lot more,” he said. “I’m showing that you can be artistic with it. It’s not a sterile piece of equipment.”

The Make It Space is a resource for students, who can come to the lab to 3D print their designs, print posters, or etch on wood, metal or plastic.