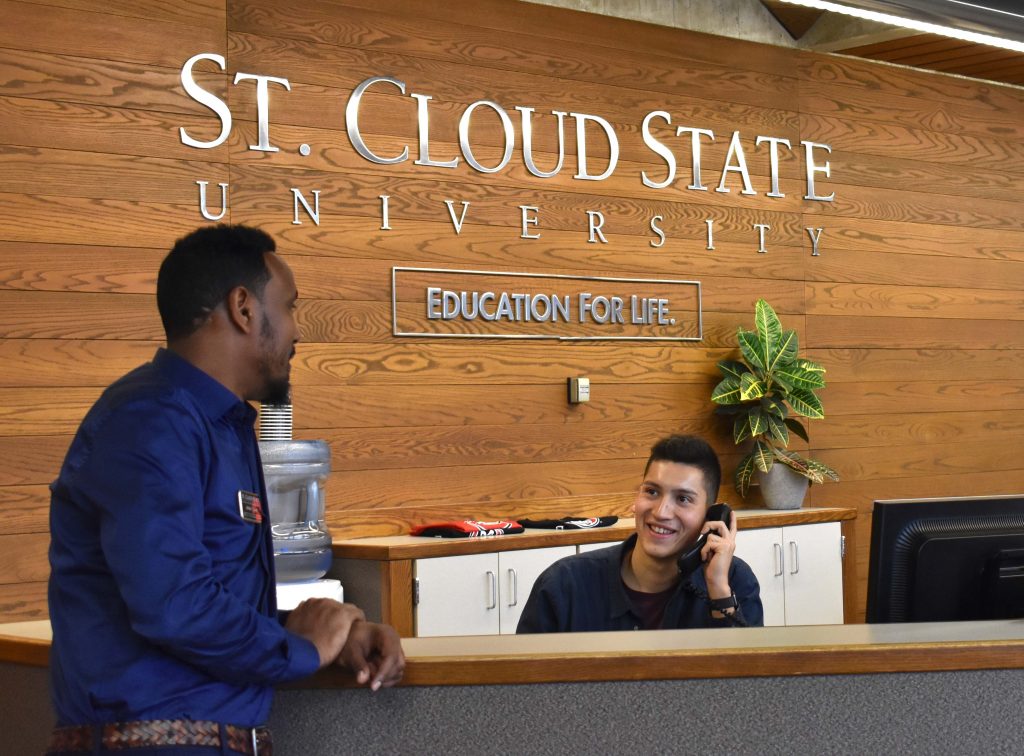 Billy Blong was born into a tight-knit American Indian family and grew up in a small town in northwestern Wisconsin. He liked the connections he forged within the Menominee tribe and in his community. There were benefits to knowing other people intimately—they would support you, could vouch for you. When it came to choosing a university, he wanted something similar. “I attended a high school where there were just 38 kids in my class,” Blong says. “It was important for me to go to a place where people knew my name and I knew theirs.”

“I’m doing things I would have never thought were possible. … If you want to feel special, not just another number, I think St. Cloud State is a great place for that.”
– SCSU student Billy Blong ’20, biomedical sciences

Blong’s father was a dentist, and the young man hoped to follow in his father’s footsteps. Plenty of big schools offer pre-dentistry curriculums, of course, and Blong applied to a few of them. But in the end, he chose to enroll at St. Cloud State because it seemed more intimate. It wasn’t tiny, but it wasn’t so big he’d get lost either. “I have friends who went to the University of Minnesota, and I’ve heard their stories,” he says. “I wasn’t prepared to be in an organic chemistry class with 300 other students.”

From his first day on campus, Blong felt a sense of connection with the faculty, staff, and students at SCSU. “I absolutely loved my classes,” he says. His professors took the time to get to know him, greeted him by name outside the classroom, and encouraged him to pursue a teaching assistantship in organic chemistry. (Which he did.)

When Blong, now in his fourth year at SCSU, asked his instructors to write him letters of recommendation for his dental school application, they responded enthusiastically. “I just feel like my professors are there to help me and have been really enlightening characters in my academic career,” he says.

Dormitory staff also took an interest in Blong’s well-being. His hall director encouraged him to get involved in the residential hall association, and he eventually became vice president of the association’s executive board. He joined the dental club, and became president of the All Tribes Council on campus.

Blong found he could be himself at SCSU. But the diverse campus environment also challenged him. His first-year roommate was from China, and all the other players on the intramural soccer team he joined were from Africa. “Being involved in all these things has allowed me to meet so many different people,” Blong says. “It’s a wonderful experience, exactly the kind of experience I was hoping my college years would be.”

“I attended a high school with just 38 kids in my class. it was important for me to go to a place where people knew my name and I knew theirs.”
– SCSU student Billy Blong ’20, biomedical sciences

Now in his fourth year, Blong spent the fall submitting applications to dental schools. He eventually plans to apply for a scholarship that will allow him to work with members of the Menominee after he completes his DDS, using his professional skills to help the community. Many Menominee who live on the tribe’s reservation in east-central Wisconsin have low incomes and little education.

Among other things, Blong hopes his decision to get an education will inspire younger members of the tribe. “I come from a big extended family: I have 48 cousins,” Blong says. “And I’ll be the first one to get a college education.”

That kind of realization can make Blong feel emotional: He feels lucky to have landed at St. Cloud. “I’m doing things I would have never thought were possible. And it’s because of the recommendations of my professors and their willingness to make connections,” he says. “If you want to feel special, not just another number, I think St. Cloud State is a great place for that.”