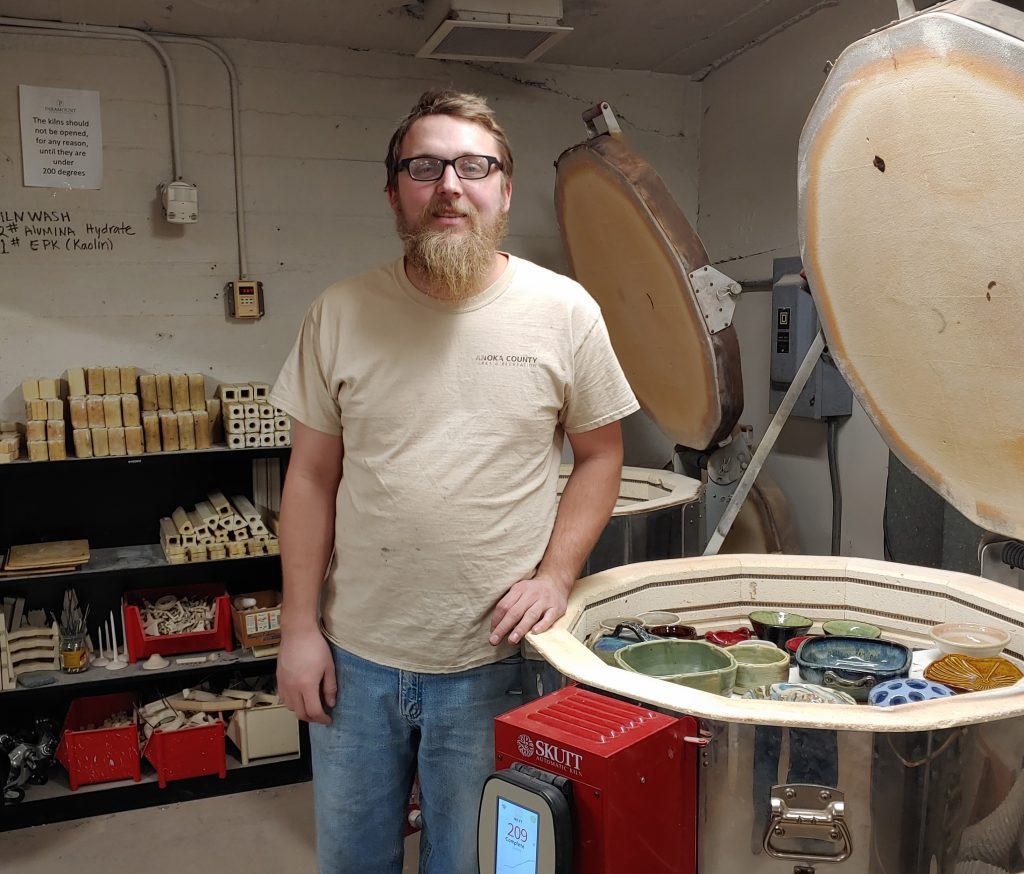 Kevin Eldstrom ’19 in his current role as Ceramics Studio Technician at Paramount Center for the Arts in St. Cloud.

Kevin Eldstrom ’19, who graduated with a degree in Studio Arts with a 3D studio emphasis from St. Cloud State University, continues to share his passion for art with the community as the Ceramics Studio Technician at Paramount Center for the Arts in St. Cloud.

Sometimes finding a career you are passionate in pursuing can occur in unique ways.

For Kevin Eldstrom, the journey to jumping into his current career was something that came about somewhat unexpected, but he is sure happy things ended up playing out the way they did.

Eldstrom, who graduated with a degree in Studio Arts with a 3D studio emphasis from St. Cloud State University in 2019, is the Ceramics Studio Technician at Paramount Center for the Arts in St. Cloud. He started in his current role shortly after graduation.

Among his many duties, which primarily includes firing pottery that is made by the patrons of the ceramic’s studio as well as managing the studio, Eldstrom enjoys the chance to continue to share his passion for art with the rest of the St. Cloud community that was ignited during his time at St. Cloud State.

“I work in the afternoon and evening time, which is the time a majority of the patrons come in. When I get in, the first thing I do is unload the kilns I loaded two days prior. Then, I reload whatever else I can reload for that day,” Eldstrom said. “After that, I take care of miscellaneous things like making sure the glazes are arranged properly, taking care of people with general concerns and other things. I really love it here.”

“I have absolutely no regrets about going to St. Cloud State.”
– Kevin Eldstrom ’19

Within his first year of working in his current role, Eldstrom also found himself as the winner of a prestigious post-graduation grant called the Jerome Grant, which helps to fund various art organizations in support of emerging artists.

“While at St. Cloud State, I had to do a mock grant application and I ended up taking my mock application, revised it and submitted it two days before the deadline,” he said. “There were a good amount of people who applied for it, and I was one of six people who ended up receiving the grant.”

Finding an interest in art

Prior to attending St. Cloud State and landing at the Paramount Center for the Arts in St. Cloud, Eldstrom initially had an interest in pursuing a career in business.

A native of Oak Grove, which is just north of Coon Rapids, Eldstrom originally attended Anoka-Ramsey Community College to obtain a business degree. There is where he ended up taking his first ceramics class and later found a strong interest in that course while spending a lot of his time in the studio. 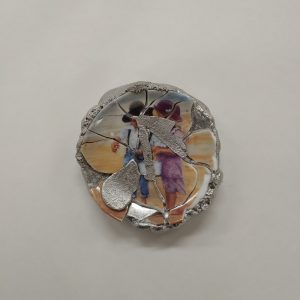 Eldstrom went on to earn a degree in business at Anoka-Ramsey, but had a growing interest elsewhere that wound up leading him to St. Cloud State.

“I did ceramics for pretty much my whole time at Anoka-Ramsey. I ultimately decided not to go into business after I got that degree,” he said. “An advisor of mine at Anoka-Ramsey was helping me with my classes at that time and was an SCSU alum. When I decided that I wanted to pursue art, my advisor introduced me to St. Cloud State and told me all about it, adding that they had a great time there.

“I have absolutely no regrets about going to St. Cloud State.”

Unleashing his passion at SCSU

When Eldstrom arrived at St. Cloud State in 2015, that’s when his passion for art and pursuing a career in it sprung into full effect.

“I feel like the SCSU art department is one of those hidden gems. There’s a huge value to it and there’s something to be had for someone to check out the art department and the campus as a whole.”

Along with having the goal of ultimately earning his degree, Eldstrom started to try and find ways to help promote the artwork of students at St. Cloud State. He wanted to help students have their work displayed around campus for everyone to enjoy.

During his time at the University, Eldstrom came up with the idea to start the Miller Center Student Art Show, which just completed its fourth year. The annual art show offers students a chance to display their artwork on campus, with the winner of the show having their work permanently displayed in the Miller Center.

“The big thing for me during my time at St. Cloud State was the art teachers preparing me for the world. I am forever grateful for that experience.”
– Kevin Eldstrom ’19

“I proposed an idea to the Miller Center and ended up connecting with University Archivist Tom Steman about it. He and I ended up taking on the task of getting the show going. Since then, it has kind of grown from there and the students seem to like it since it’s a show outside of the art building,” Eldstrom said. “It helps push the art students to show off their work to people they are not familiar with.”

“I originally wanted to recognize the desires from the arts students and wanted to make a difference. I was part of the art club and heard information from one of the teachers that the Miller Center was looking to get some student artwork to display,” Eldstrom continued. “I saw there was an opportunity for students to show off their work outside of just the art building.”

Although he is done with his schooling in St. Cloud, Eldstrom continues to work in the area while sharing an interest in art within a community that helped ignite that passion during his time at St. Cloud State.

“I had a great time there. I had great teachers and it was just overall a great experience. I ended up at the Paramount, which is a credit to SCSU and everything I experienced there,” he said. “Before SCSU, I was never really a person who loved the school I was at, but after going to St. Cloud State, I can say that I am enthusiastic about it and the success of it.

“The big thing for me during my time at St. Cloud State was the art teachers preparing me for the world. I am forever grateful for that experience.”

« Student sculptor incorporates historic Eastman Hall elements
Minnesota fought for the Union in the Civil War. So how did the state benefit from slavery? »