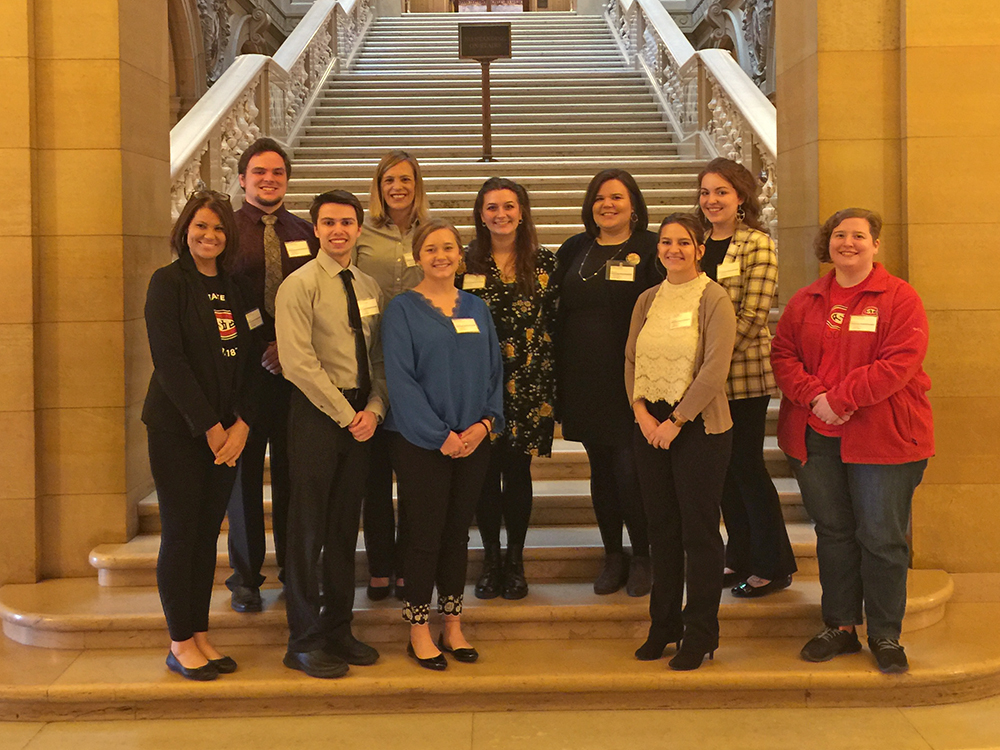 Ten St. Cloud State students were among the 26 Minnesota State system students presenting at Posters at St. Paul Feb. 28 at the state Capitol.

This event provides undergraduate students the opportunity to share the results of their scholarly work with Minnesota state representatives and legislators in hopes of positively impacting the state of Minnesota.

Posters at St. Paul is planned through the combined efforts of the Minnesota Undergraduate Scholars Council, which is a consortium of institutions that supports the research, scholarly works and creative activity of undergraduates by providing avenues for funding, presentation resources and opportunities for them to present their work.

The students were among 26 projects being presented from six campuses across the Minnesota State system.

The 10 St. Cloud State students who participated in the event included:

Type 1 diabetes (T1D) is a chronic autoimmune disease in which T cells destroy insulin-producing cells in the pancreas, leading to hyperglycima. Some T cells directly kill the cells, such as T-cytotoxic (Tc), or indirectly such as T-helper (Th), while regulatory T cells actually protect them. A recent study showed that sodium bicarbonate (SB) exhibited anti-inflammatory activity by affecting immune cells other than T cells, speculating its potential for the treatment of autoimmune diseases. Since SB has never been tested in an experimental mouse model for autoimmunity, we studied the effects of SB treatment on the development and severity of T1D, as well as on T cell subsets and T cell function.

There were no differences in splenic lymphocyte counts and viability between SB-treated and control mice. Although results showed SB signifcantly decreased glucose levels and delayed diabetes development, it does not seem to  affect the frequency of T cell populations nor their proliferation capacity. Our results suggest beneficial effects of SB in the prevention of mouse autoimmune T1D and highlight the need for further studies on its mechanism of action.

In today’s polarized political climate, it’s hard to believe we will ever be united again. In my research, I explore the highly controversial topic of electoral bias, also known as gerrymandering, and what can be done to heal political divides. States must redraw voter districts to address population shifts after census results are released every decennial cycle. As geographers, our role can play an important part in the elimination of partisan districting through mapping technology. I hope to show that as technology advances, sophisticated mapping technology can help in the elimination of electoral bias.

Math in Balance is an educational app created to help anyone who struggles solving single variable equations. Users can select from one of three characters to follow a unique path to solving equations. This app is formatted so the user is presented with a linear equation and asked to solve for x. Using the interactive scale, users balance the equation as a visual reminder that what is done to one side must also be done to the other. Once the problem is solved correctly, the user gets a stamp and can move onto the next equation. Each path has 10 equations and can be completed multiple times with different problems appearing each time.

Chinese immigrants began to steadily enter the United States starting in 1849 and were almost immediately seen as a threat by white Americans. Fears of white racial purity, jobs and change to culture prompted lawmakers to pass discriminatory laws against Chinese immigrants throughout the end of the nineteenth century. These oppressive measures culminated in the Chinese Exclusion Act of 1882. which banned the entry of Chinese laborers. A common misconception is that Chinese immigrants did not fight back against oppression; however, they did resist their mistreatment, mainly through litigation. The legal battles of Chinese organizations and individuals highlight agency and persistence in their fight for equality.

Many textbooks and history lessons highlight women’s suffrage as the epitome of women’s rights of the Progressive era. While the right for women to vote is indeed something to be celebrated, women of the era was know n for extensive social activism and suffrage was not the only thing activists were seeking to accomplish for women. Women worked for access to education, better working conditions, freedom from the institution of marriage and for racial equality. Women were major contributors in the challenging task of reforming and modernizing early 20th century America. To gain an expanded view of the fight for women’s rights during the Progressive era it is consequential for educators to go beyond suffrage and the 19th amendment.

The election of 1876 pitted Republican Rutherford B. Hayes against Democrat Samuel J. Tilden, neither of whom were powerful choices. When the votes were tallied in November 1876, there still wasn’t a winner. After much debate, it was decided that an Election Commission should be formed. The Commission would be made up of five U.S. Senators, five U.S. Representatives and Five Supreme Court Justices. Supreme Court Justice David Davis had been tapped to head up the Commission. In the hopes of swaying the decision of the newly-appointed Election Commission, the Democrats in the Illinois Legislature abruptly nominated Supreme Justice David Davis to fill a Senate seat that had been sitting vacant for weeks. Davis accepted the nomination but resigned his seat on the Election Commission. Supreme Court Justice, and Republican, Joseph Bradley was named as the new head of the Commission. Bradley cast his vote for the Republican and gave the election to Hayes. This strange case of backroom deals, compromises and uncertainty shows how important the role of the state legislature can be, not only in their home state, but also on a national level.

Reiki is an example of a holistic healing practice that can be used for participants’ overall well-being. Well-being can be seen through mental, emotional and physical forms with my participants. Reiki can be described as a holistic energy healing that focuses on moving of of energy through the body to help realign or balance the recipient’s energy and help heal ailments. Through the use of participant observation I was able to experience how and why Reiki is used and directly see its influence on the recipients’ well-being. I argue that Reiki is used as a method of well-being, in similar ways that yoga, massage and medication

“‘This is What Community Should Look Like’: an Ethnographic Study of Community Building Within a Local Nonprofit Organization”
Faculty mentor Kelly Branam Macauley

This ethnographic study is based off of six weeks of participant observation and ethnographic research with Neighbors to Friends, a local grassroots organization in Central Minnesota that facilitates a free laundry program and runs a mobile shower vehicle that provides showers to those experiencing homelessness. By fully participating in the day-to-day understanding of Neighbors to Friends, the purpose of this project is to gain a holistic understanding of how this unique nonprofit organization creates a sense of community for those experiencing homelessness and poverty. By comparing my observations to scholarly research about community and grassroots leadership styles, I argue that Neighbors to Friends not only meets the physical needs of marginalized individuals experiencing homelessness and poverty, but fosters an environment where community is created and the need to belong is met as well.