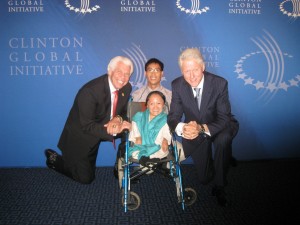 Kathy Johnson, associate professor in the Department of Special Education, recently accompanied Zhao Chin Li, known to many as Angel, to the Clinton Global Initiative (CGI) annual meeting in New York City. They attended the CGI meeting on behalf of Ginkgo Academy Partnership, a P-16 community initiative among Minnetonka Schools, St. Cloud State, Yangshuo Mountain Retreat creator Chris Barclay and others who work to support the advancement of opportunities for children with disabilities.

Born with brittle bone disease and dwarfism, Angel was unable to attend school as a child. She was locked in hiding during President Bill Clinton’s visit to China in 1998. Against odds, she has connected with American politicians and educators who have championed her cause.

“Angel was the highlight of the session,” Johnson said.

Among those visibly moved was Clinton, who recounted meeting Angel for the first time on stage during the Closing Plenary Session. “It was really one of the most life affirming experiences I’ve ever had,” Clinton said. “For the rest of my life, in every down moment, I will seek to remember this beautiful woman.”

Afterwards, Johnson and Angel were invited backstage to discuss plans for building a bi-lingual school for children with disabilities in China, where many disabled children are denied an education.