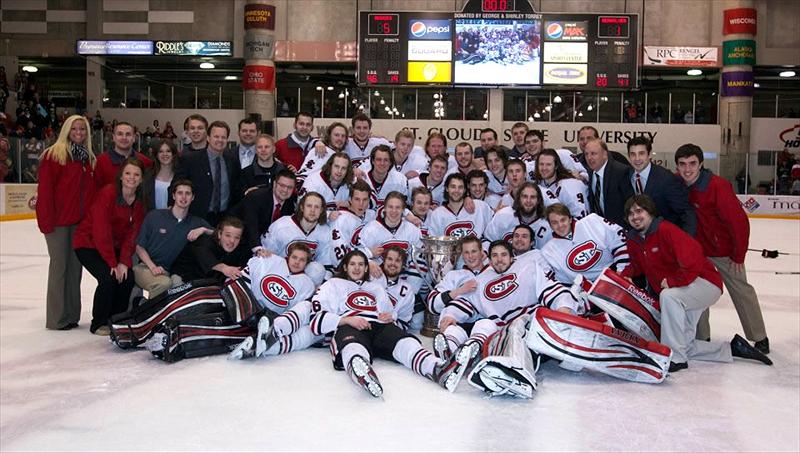 It is a Saturday night script to remember at St. Cloud State.

Men’s Husky Hockey defeats University of Alaska Anchorage 5-1 March 16 at the National Hockey and Event Center (NHEC) to advance to the WCHA Final Five tournament and a top-seed chance at winning the Broadmoor Trophy in St. Paul.

“It has been a great season, a courageous win. It signifies what this University is all about.” — President Earl H. Potter III

Senior captain Drew LeBlanc, Hermantown, scores the first goal of the game and notches two assists, adding more luster to a season that includes a WCHA Player of the Year nod, a WCHA Outstanding Student-Athlete award, a Hobey Baker candidacy that is drawing national attention, and a possible NCAA D-I plaque for most assists during the 2012-13 season.

The cup, a 100-year-old silver symbol of collegiate hockey excellence, is displayed at the NHEC, amid construction efforts that will transform Central Minnesota’s college hockey cathedral. Throughout most of Saturday’s game a long line of people snakes from the upper atrium down the second-floor mezzanine. Moms, dads, children, students, former players — steadfast fans of all stripes, but just two colors — patiently wait to touch and be photographed with the symbol of a WCHA championship.

At center ice, President Earl H. Potter III stands by the painted words “McDonald Rink,” words that memorialize a predecessor, the late President Brendan J. McDonald. For long-time fans the leadership narrative comes together like a Frank Capra film: A torch is passed from the man who fought to bring NCAA Division I hockey to St. Cloud, and build a St. Cloud State hockey arena, to the man leading a $30 million donor-funded renovation of that 24-year-old facility.

As the crowd begins filtering out of the NHEC, Potter speaks with Husky Productions student reporter Julia Allen, Big Lake: “It has been a great season, a courageous win,” says Potter. “It signifies what this University is all about.”

Heather Weems, director of Husky Athletics, grabs her smart phone and tweets: “Thank you Husky Nation – tonight was fun! This one’s for current and former players & coaches, and all the fans! Cheers!!!”

“Thank you Husky Nation – tonight was fun! This one’s for current and former players & coaches, and all the fans! Cheers!!!” — Heather Weems, director of Husky Athletics, via Twitter

In northern California, one of the most decorated former players, Olympian and Stanley Cup winner Bret Hedican, tweets: “Couldn’t be prouder of @stcloudstate #huskies clinching #wcha Way to go boys! Feels good to be a small part of our great school & tradition!”

It’s almost midnight and the arena is nearly empty. First-year forward Jonny Brodzinski takes center ice with the MacNaughton Cup, his mother, Kathy, and his father, Mike. A photo commemorates the evening and captures connections between past and present. Mike, a two-time All-American who skated for Herb Brooks from 1984-87, helped St. Cloud State claim third place at the 1987 NCAA Division III championships.

Players from the 1986-87 team, the undefeated 1961-62 team, the record-setting 2000-01 Broadmoor Trophy team — and other celebrated Husky squads — are watching, waiting, cheering. Will these young men have the stuff to make more St. Cloud State history?

Men’s Husky Hockey plays University of Wisconsin 2:07 p.m. CDT March 22 at the Xcel Energy Center, St. Paul. With the No. 1 seed, earned via a league-leading 18 wins, the Huskies (23-14-1) enjoy a theoretical path of least resistance to the Final Five title and its symbol, the Broadmoor Trophy. View the WCHA Final Five news release (PDF).