St. Cloud State University has more than 250 clubs and organizations. From joining a fraternity, Bowling Club, Swing Dancing Club or Chess Club there are numerous choices, but if you’re an outdoorsmen one may stand out above the rest.

The Husky Bass Fishing Club is starting its sixth year and is growing bigger every season. The club has reeled in 11 anglers that compete in nationwide tournaments, traveling as far south as Alabama and as far east at Kentucky. 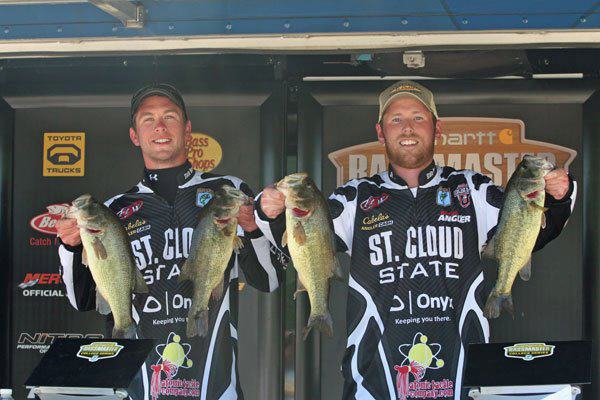 In 2009, founder Korey Sybrant ’12, got the itch to start the fishing club. He went through the Outdoor Endeavors program and Student Government to get it started.

“We are a competitive team, but we don’t have try-outs or anything,” said club president Brandon Donovan. “Anyone can be a part of our club.”

The club has people who have never fished a tournament and others who have been fishing tournaments since they were young.

“We don’t require people to know everything about bass fishing, and if a person doesn’t know a technique, they can learn it from another member,” Donovan said.

The club doesn’t have a coach. The team members rely on each other to learn new tricks, new techniques and to refine their skills.

Though the club has hooked a few sponsors — Krugerfarms, Atomic Tackle and Onyx — student activity fees fund the club by helping it pay for gas to tournaments, lodging and the licenses needed in different states. Everything for the tournaments — from boats to rods to tackle — are provided by members.

“Our club is unique because there are so many opportunities that can come from college fishing,” said member Kevin Carver. “There is even a possibility to fish at the highest level possible because college fishing is a feeder program to the professional tours where other clubs don’t have that option.”

In 2014 the team will attend four tournaments — more if they are able to qualify for regional tournaments. The team’s best result last season was finishing 16th out of 50 teams in a Fishing League Worldwide (FLW) tournament at Carlyle Lake in southern Illinois. The season usually goes from spring to fall, but can go year round if a pair qualifies for the national championship.

“We usually have two (members) compete in our FLW tournaments because they have a very limited number of spots, but we try to send more if we can,” Donovan said. “For fishing the College BASSMASTER we try and take the whole team. In our club tournaments we take the entire team.”

A points system is used to determine who is able to fish the national events. To gain points, members attend meetings and fundraisers. There are more points to gain by doing well in club tournaments.

“We are serious when we are fishing, but we have fun because it’s more about having a good time as a team and catching some nice fish in the process,” Donovan said.

St. Cloud State is one of 170 colleges in the nation and one of five in Minnesota to have a Bass Fishing Club.