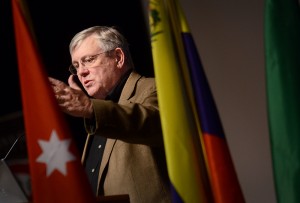 Since July 2007, President Earl H. Potter III has led St. Cloud State University with an understanding and support of its mission of providing an affordable, high-quality education for students from Minnesota and around the world.

Through his work to prepare students for life, work and citizenship in the 21st Century, President Potter established himself as a leader to envision the University as a driving force for progress and problem solving in the region and as a great pride for the community and state.

At 69, President Potter was about to begin his next three-year term at St. Cloud State July 1. He died June 13, 2016 in a one-vehicle rollover crash.

Under President Potter’s leadership the University has strengthened its strong commitment to an integrated student learning experience. The University has been energized by his forward-looking perspectives and his innovative approach to bringing about positive change with a dedication to improving retention and graduation rates among St. Cloud State students.

His leadership steered St. Cloud State toward grounding every professional program in the university in a firm understanding of the needs of employers and graduates, while focusing on developing support for a broad liberal education for employees and graduates.

He was dedicated to keeping the cost of education affordable for all students and to increasing the availability of scholarships.

President Potter brought his military background and support of veterans to campus and oversaw efforts to increase veterans’ services on campus. St. Cloud State has earned Military Friendly honors every year since 2009.

His dedication to internationalization, inclusivity and education abroad were also clear in his work serving students and the community.

His commitment to service was recognized by the St. Cloud NAACP with its 2016 Presidential Award in January 2016.

During his tenure, President Potter also oversaw the building of the Integrated Science and Engineering Laboratory Facility (ISELF) and Coborn Plaza Apartments, an addition to Herb Brooks National Hockey Center and renovation of Case-Hill Hall, among many other improvements on campus.

Prior to joining St. Cloud State, Potter was executive vice president and provost at Southern Oregon University; dean of the College of Business at Eastern Michigan University; dean of the School of Management at Lesley University; director for organizational development and employment services at Cornell University; associate dean for academics at the U.S. Coast Guard Academy; chief negotiator for management and head of the Department of Economics and Management at the U.S. Coast Guard Academy; a fellow for the American Council on Education in the Office of the Chancellor at the University of Colorado; a Mellon Foundation Faculty Fellow at Yale University; and a National Institute of Mental Health Fellow at the University of Chicago.

Potter and his wife Christine Marshall Potter have adult children and grandchildren.