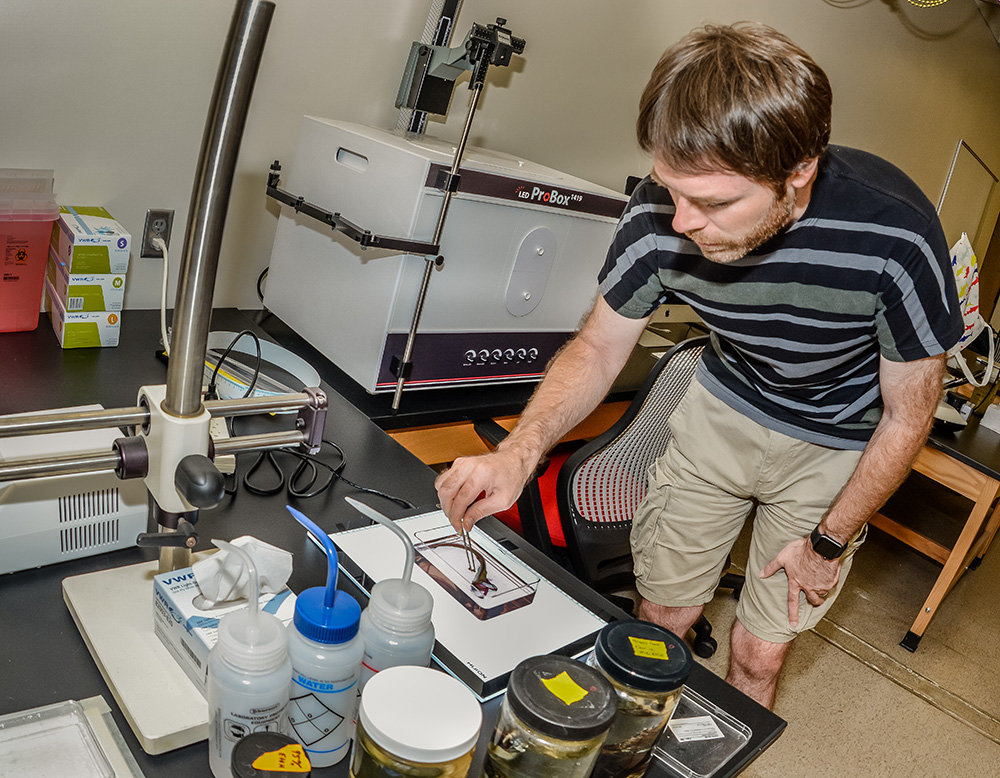 Matthew Davis is improving our understanding of evolution with dazzling fish photos that reveal anatomical details.

The assistant professor of biology is part of a seven-scientist team that announced two new photography techniques earlier this year.

Davis’ photos of strange deep-sea fish — featured in Science magazine — are possible because the research team solved a problem that hampered biologists for decades.

In the technique called clearing and staining, fish are bathed in cow-stomach enzymes, which digest the muscles and make the skin transparent, but leave connective tissue and bones intact. Multiple baths dye the cartilage blue and bones red.

One catch: With muscles dissolved away, fish were too floppy to be posed naturally for the camera.

Team leader Leo Smith, associate curator of fishes at the University of Kansas, experimented with suspending fish in various liquids. Then he stumbled upon a mix of glycerine and gelatin that hardened slowly enough to allow precise positioning.

The team also figured out how to shine specific wavelengths of light on the fish, while filtering out all colors except red or green. The resulting fluoresced images make “anatomical images pop like never before,” according to the Sept. 14 issue of Science. 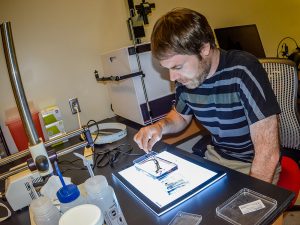 The new techniques were shared in detail in the October issue of Copeia, the official journal of the American Society of Ichthyologists and Herpetologists.

Martin is pursuing a doctoral degree in ecology and evolutionary biology at the University of Kansas. She credits Davis for preparing her for this chapter of her life.

“Dr. Davis taught me many skills, from techniques in phylogenetics and morphological analysis, to technical writing and scientific illustration,” said Martin. “I think the most impactful thing Dr. Davis taught me was to have a critical eye for everything I do.”

“He taught me multiple skills, such as professional writing, scientific illustration, and public speaking,” said Olson. “I think the most important skill I learned from Dr. Davis is to self-edit my own work, which has enhanced my quality of work more than anything.” 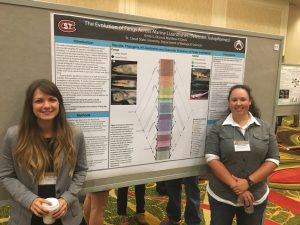 Rene Martin (left) and Emily Olson presented a poster on deep-sea lizardfishes at the 2016 Joint Meeting of Ichthyologists and Herpetologists in New Orleans.

Latha Ramakrishnan, associate provost for research and dean of graduate education, says Davis’ reputation as a scientist and teacher is attracting attention.

“In the last two years I have heard new incoming graduate students saying, ‘I came to SCSU to work with Dr. Davis,’ ” said Ramakrishnan.

“Matt’s major quality is that he is never afraid to take a chance on something, and because of this, he experiments with more ideas than a lot of our colleagues,” said Smith.

Said Smith: “He has built a strong team at St. Cloud State. His graduate students are always exceeding expectations and are well prepared because of their devotion to him.”

Davis has collected fish for study in places such as Taiwan, Vietnam, Panama, Kansas, Louisiana, Minnesota and Mississippi.

He teaches a range of courses including BIOL 322 Ichthyology, BIOL 339 Statistical Design and BIOL 461 Conservation and Management of Animals.