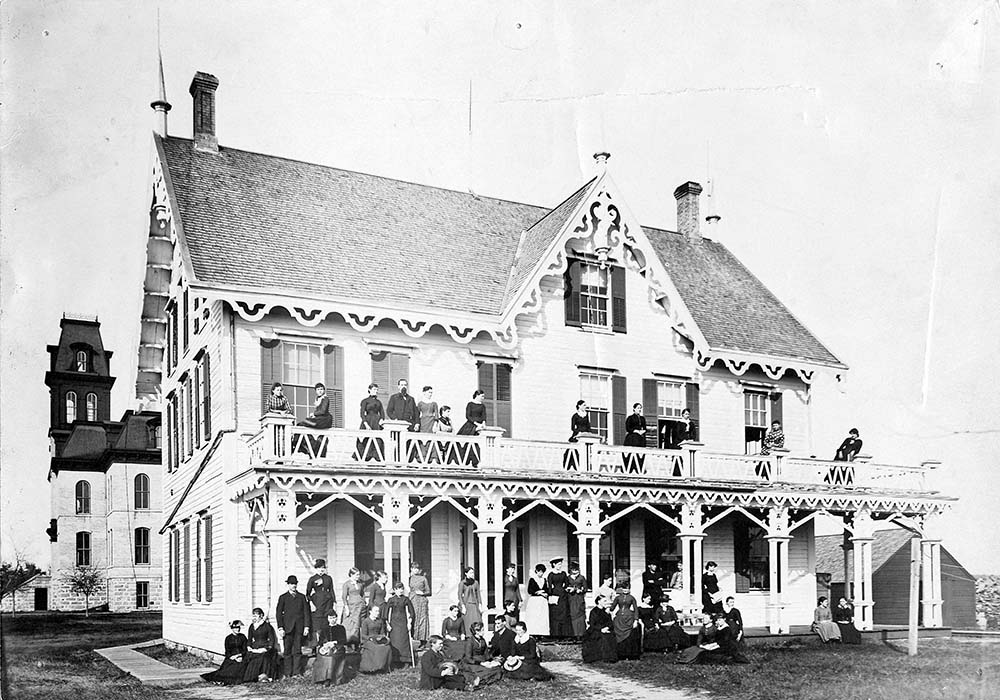 Stearns House serves as a women’s dormitory following the opening of the Main building in 1874.

The St. Cloud community provided the $5,000 needed to secure the site for the school. Stearns Hotel was chosen out of four sites considered by the State Normal School Board. The site, just north of where Riverview now stands, was chosen for its beautiful location on the bluffs over the Mississippi River and because the hotel, with just a few updates, could serve as a temporary school

When the school opened Sept. 15, 1869, it was housed completely within the converted three-story hotel. It had a large open space for classes on the first floor, a two-classroom model school on the second floor and student living spaces on the third floor.

The building was always intended to serve temporarily as the school building, and indeed funds soon came through from the legislature to build a permanent building, which opened as Old Main in 1874.

Stearns House continued to serve the school as a women’s dormitory until 1885 when the Ladies Home, later renamed Lawrence Hall opened. Stearns House was by then in poor condition, but was used for two years as a Young Men’s Hall until 1887 when the building was demolished.

Prior to its service as a school, the building served as a hotel in the city of St. Cloud for people who traveled up the river. During that time, slaveholders and people they owned as slaves also stayed at the hotel while visiting the city, according to research conducted by St. Cloud State Professor Chris Lehman.

These slaves were the first black people to visit the future site of St. Cloud State where Ruby Cora Webster would graduate as the first student of color in 1909.

In fall 2018, the university honored Webster with the naming of Ruby Cora Webster Hall, located not far from the site of the former Stearns Hotel.