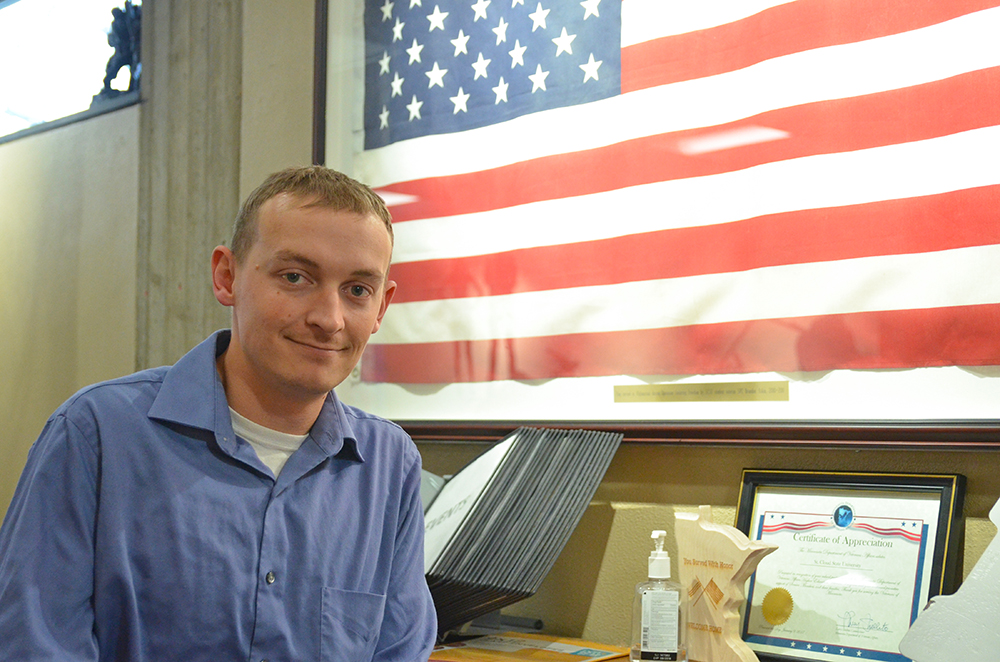 Student speaker Brandon Askin donated the framed flag behind him to the Veterans Resource Center. He carried the flag beneath his body armor while serving in Afghanistan.

As a student Brandon Askin led the Student Veterans Organization, raised his sons, worked, and pursued his own education.

Askin was busy, but he always found time to help fellow veterans. If there was time between classes, he’d tutor others on physics or math. When someone needed help explaining their military work on their resume, he’d share his as an example.

In December, Askin shared his advice one more time before graduating — this time with all his fellow graduates.

Askin’s path to graduation was a winding one. He never expected to end up in college. As a student at Sauk Rapids High School, he didn’t believe college was an option. He was focused simply on graduating and getting in to the workforce.

Then the Great Recession hit, and, while struggling to get by, Askin joined the military with his brother. He served in Germany before being deployed to Afghanistan.

After returning from Afghanistan, Askin was injured in Air Assault training, ending his service. Back home in St. Cloud he became a welder and father. He decided he wanted to provide a better life for his family.

“That’s when I started school,” he said.

Since his high school grades weren’t the best, he started in pre-college math taking two courses to prepare him for the college-level classes he’d need in his mechanical engineering major. But this time school was a priority that would advance his family, and Askin was earning As and Bs from the start.

“The transition to school was actually really easy,” he said. “I just had more drive and commitment than I did when I was in high school.”

At the time he was working for DCI Inc. as a welder and machine operator. He continued working for the company eventually doing his internship there and staying on as an engineering assistant.

Askin found that coming back to school as a non-traditional student allowed him to focus on his studies because he already had life skills to manage living day-to-day. 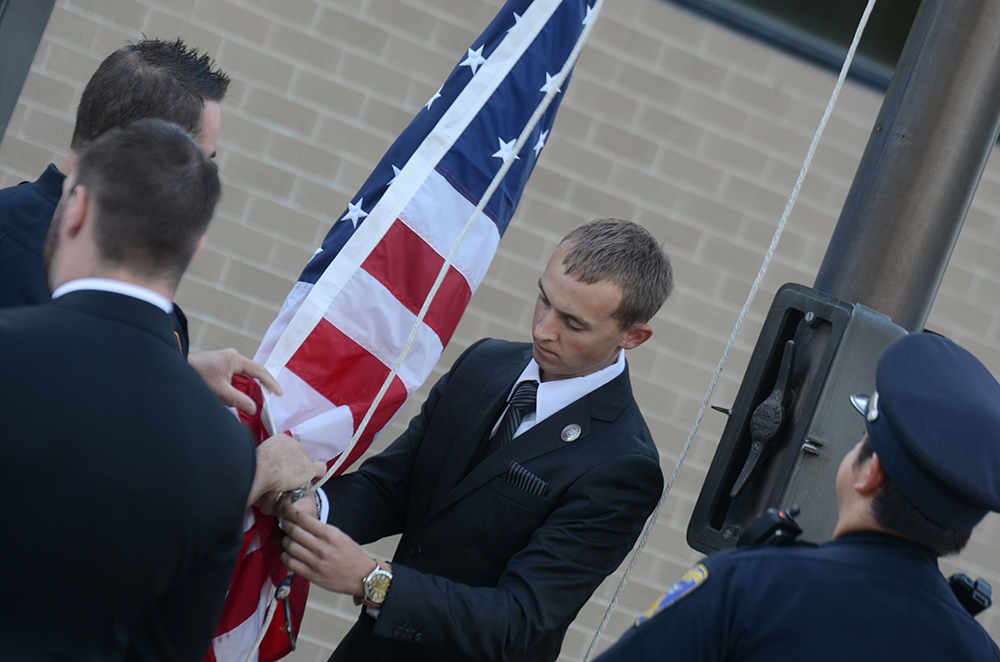 As president of the Student Veteran Organization Brandon Askin helps raise the flag at a Patriot Day, Sept. 11 recognition. The student organization puts on the event each fall with the Veteran Resource Center.

Going to school is a commitment. It’s a combination of time management and getting used to not having time for unnecessary things, he said.

As his family grew and changed, Askin needed to spend more time focusing his personal life, and he made the decision to switch majors on the advice of adviser Nancy Sundheim.

“It was a lot for me to deal with at the time, and I knew I had to keep going to school to get my degree,” he said.

Sundheim helped him switch from mechanical engineering to a degree that would use his credits to apply to the major. He chose manufacturing engineering technology, which meant the courses he had already taken fulfilled his prerequisites and he could focus on his advanced classes.

Even though he was busy with family, work and classes, Askin also made time to get involved in the Student Veteran Organization, serving as president.

“Something you really miss when you leave the service is talking to other veterans and that sense of camaraderie,” he said. “Trying to talk about veteran stuff to other people who aren’t veterans isn’t easy,” he said. “When you get out, you kind of have a sense of loneliness where you can’t really talk to anyone about what all happened. Being able to talk to veterans helps, and having that here helped a lot.”

Today he is a project manager at Custom Caseworks where he manages the life cycle of contracting jobs with construction sites across the country.

His goal is to one day serve as the general manager or operations manager for a factory.

His St. Cloud State education will be part of accomplishing that goal, and that’s part of what he wants to share at commencement.

“You can achieve a lot if you’re willing to sacrifice something,” he said. “… If you work hard, and you’re persistent, and you wake up every day trying to be better than you were the day before — you’re going to go far.”