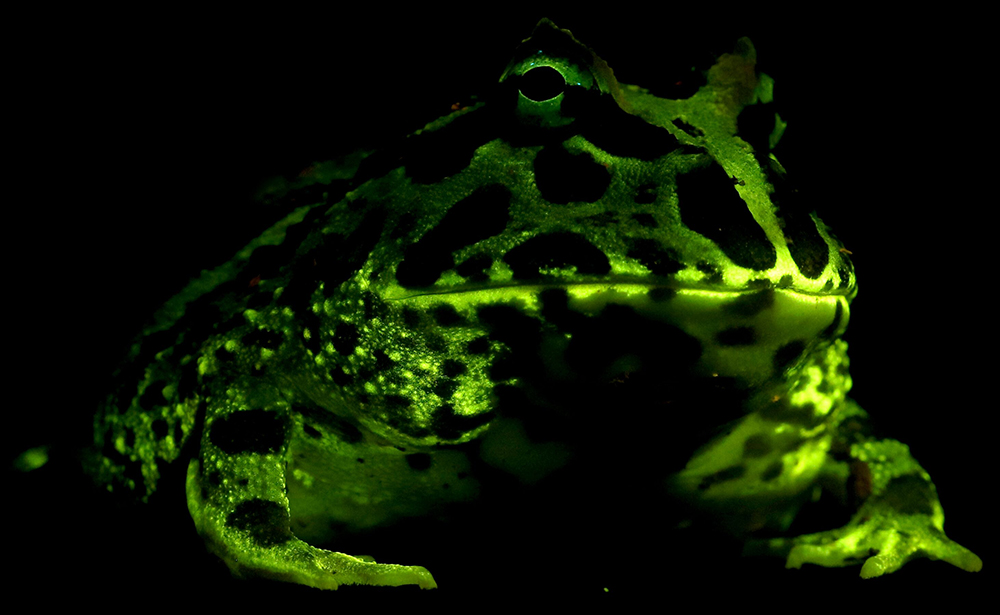 Biofluorescence, where organisms emit a fluorescent glow after absorbing light energy, may be widespread in amphibians including salamanders and frogs, according to a study in Scientific Reports.

Biofluorescence had previously been observed in only one salamander and three frog species.

The authors found that all species examined were biofluorescent, although the patterns of fluorescence differed substantially between species ranging from fluorescent blotches and stripes to fluorescent bones or all-over fluorescence.

The authors suggest that biofluorescence may enable amphibians to locate each other in low-light conditions as their eyes contain rod cells that are sensitive to green or blue light. Biofluorescence may create more contrast between amphibians and their environment, allowing them to be more easily detected by other amphibians. It could also aid amphibians in camouflage, predator mimicry or mate choice, as has been observed in other biofluorescent species. 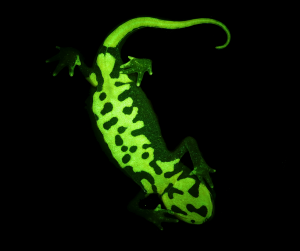 Mechanisms underlying biofluorescence may include the presence of fluorescent proteins and compounds in skin, secretions and bones or may relate to the chemical and structural composition of some amphibians’ chromatophores (pigment-containing and light-reflecting cells), according to the authors.

The findings suggest that ancestors of modern amphibians were able to biofluoresce, resulting in the phenomenon being widespread among amphibians alive today.

The citation for the publication is:

Lamb is an assistant professor of biology at St. Cloud State with research interests in herptology, population genetics and conservation. She has done much work with salamanders and other amphibians.

Davis is an associate professor of biology at St. Cloud State with research interests in fishes, deep sea, bioluminesence, evolution, systematics, macroevolution, genomics and anatomy. He has previously studied bioluminescence in fish species.

Scientific Reports is an open access journal publishing original research from across all areas of the natural and clinical sciences.

The study has been covered broadly by the press including:

New Scientist: It turns out loads of frogs and salamanders are fluorescent

Science News: Glowing frogs and salamanders may be surprisingly common

Scientific American: Salamanders and Frogs Light up with Secret Superpower

Eastern Tiger Salamander. When exposed to blue or ultra-violet light and measured the wavelengths of light emitted by the animals using spectrometry the salamander’s spots are revealed to be biofluorescent.

One thought on “Biofluorescence may be widespread among amphibians”