Ethnic Studies Professor Dr. Christopher Lehman is the winner of the 2020 Minnesota Book Award for Minnesota Nonfiction for “Slavery’s Reach”.

The book takes a look at how Minnesotans invited slaveholders to bring their wealth into the new state from before statehood until the Civil War. Dozens of southern slaveholders, or those raised in slave-holding families, purchased land in the state and invested in Minnesota businesses, institutions and communities. It details how their investments in Minnesota in turn supported their plantations in the South.

The Minnesota Book Awards recognize the best works by Minnesota authors and is organized by the Friends of the St. Paul Public Library. The winners were chosen by a group of 27 judges from around the state that includes teachers, librarians, booksellers and others from the literary community.

Other finalists in the category include: 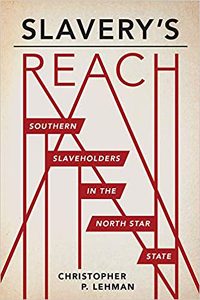 The awards also honor publications in:

A professor of ethnic studies, Lehman coordinates the African American Studies minor at St. Cloud State and is the former faculty adviser for the Council of African American Students on campus. He is the author of five other books. His book “The Colored Cartoon: Black Representation in American Animated Short Films” was honored by the Association of College and Research Libraries as an outstanding academic title in 2008.