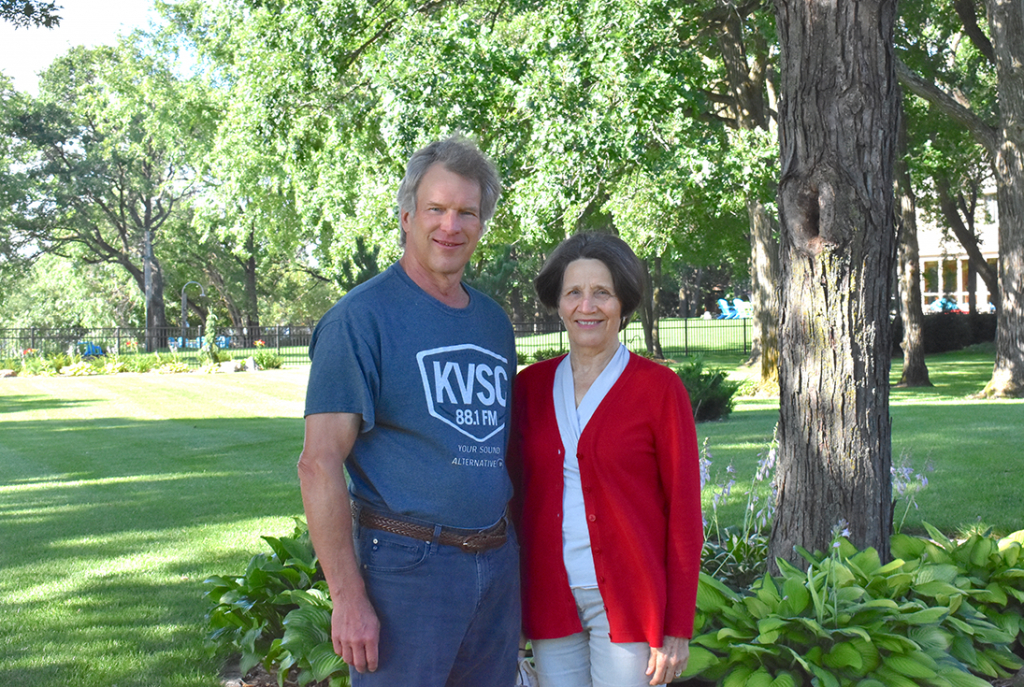 Mike and Karel ’78 Helgeson pictured at their home in Sartell.

Mike and Karel ’78 Helgeson have shown generous support for KVSC and St. Cloud State University with a gift of more than $100,000, KVSC’s largest gift in its 53-year history.

For Mike and Karel ’78 Helgeson, supporting their local community has been an important aspect of their lives for as long as they can remember.

A unique connection and family ties to St. Cloud State University sparked their most recently display of support for KVSC and the University.

“The Helgeson gift not only supported much needed studio and technical improvements at the radio station, it rallied our listeners, students and volunteers.”
– KVSC station manager Jo McMullen-Boyer ’91

Along with those family ties, the Helgeson’s son, Erik also spent many hours at KVSC, the student-run public radio station licensed to SCSU with a listening radius of around 70 miles. While in high school, Erik volunteered at KVSC doing reggae and world music shows. 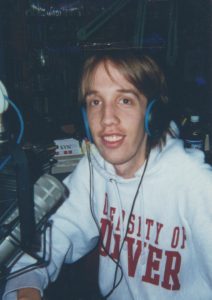 “Erik had his FCC (Federal Communications Commission) license before he had his drivers license. Because he didn’t have his license yet, in order to do the Freeform radio show during the summer, Karel drove him in at 2 a.m. and I picked him up at 6 a.m.,” Mike said. “It got his interest in radio and he really enjoyed it.”

KVSC gave Erik an introduction to media and helped develop his strong interest in radio and production. He later attended Augsburg College and revived KAUG, the campus radio station, which had not been operating for a few years. After graduating from Augsburg, Erik attended the Institute of Production and Recording in Minneapolis. He is still involved in media as the Executive Producer of movies, including “Tuscaloosa” starring Natalia Dyer of Stranger Things, a movie filmed entirely in Minnesota with a mostly local crew.

“What he experiences at KVSC had an impact on the rest of his life,” added Karel, who graduated from SCSU in 1978 with an art degree.

Giving Back to KVSC

With strong ties to both KVSC and St. Cloud State, this fall, the Helgesons gave back to radio station and the University with a gift of more than $100,000, the station’s largest gift in its 53-year history.

“We know the money going there will be well utilized,” Mike said. “Jo McMullen-Boyer, the station manager at KVSC, has done an excellent job over the years managing it. The operations director Jim Gray, he’s amazing in terms of getting a lot of impact and value for the dollar. You know the radio station is well operated and the funds going there are used very effectively.

“It’s about allowing them the ability to have the right equipment and infrastructure so it can stay on the air.” 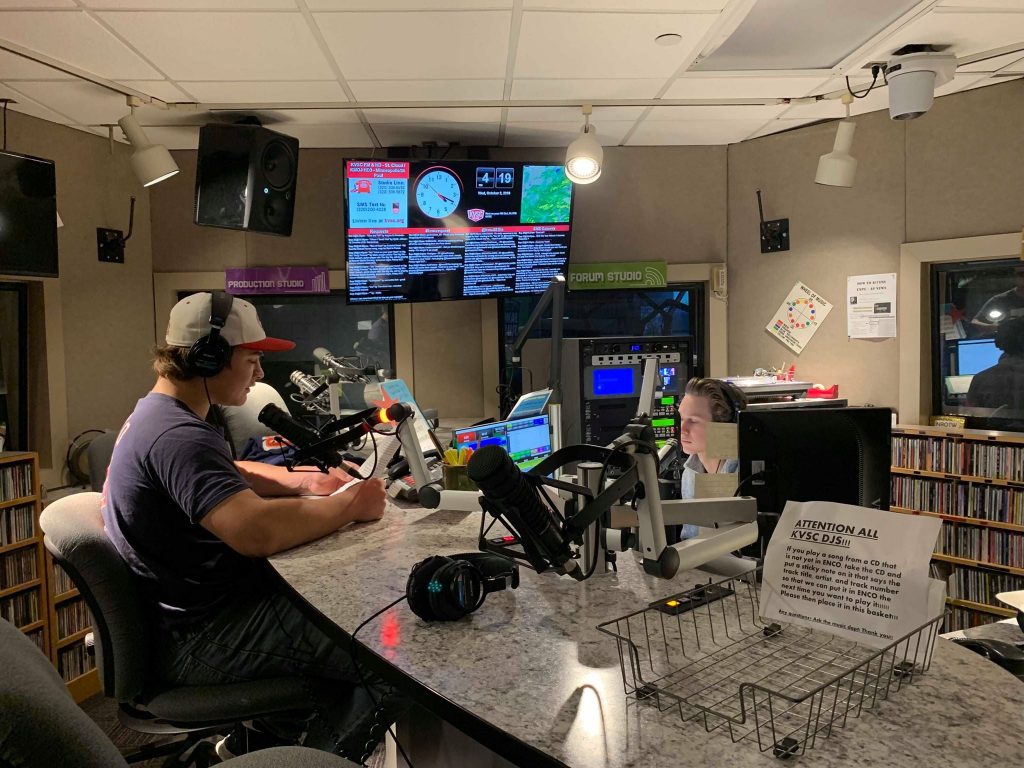 SCSU students on air at KVSC.

The gift from the Helgesons will help KVSC with multiple upgrades to continue operating, including studio upgrades, a new antenna and feed line on its radio tower and other upgrades.

“The Helgeson gift not only supported much needed studio and technical improvements at the radio station, it rallied our listeners, students and volunteers,” McMullen Boyer ’91 said. “The Helgeson gift and matching challenge helped energize many listeners and alumni members to either support KVSC for the first time or increase their donation. In my opinion, it took the Helgeson leadership and generosity to inspire others to support the radio station. It also brought positive energy and unified focus for the KVSC staff, students and on-air volunteers.”

Outside of the physical upgrades the gift will provide KVSC with, McMullen Boyer and the rest of the staff at the radio station saw the Helgesons gift make an impact in the community at large while showing support for the station.

“We feel that if we have the opportunity to give back that it’s important to do that. We want to support our local community and help make it a better place for future generations.”
– Mike Helgeson

“It was an incredibly humbling and positive experience for the radio station. It truly felt like it was a collective effort by so many people who care about independent music on KVSC and the importance of campus and community radio,” McMullen Boyer said. “It has set a positive tone going forward in our fundraising abilities and connection to our supporters.

“The Helgesons were the spark of a major fundraising undertaking for the station. Their support will allow KVSC to have a strong signal for decades to come in supporting the voices of our campus and community.”

Both Mike and Karel agreed the station and University provide individuals with great life experiences, including themselves as loyal KVSC listeners. To this day, the Helgesons regularly tune in to the station on the weekends, listening to shows such as Frets Folk & Bluegrass Show, Woodsongs Old Time Radio Hour and more.

And with their most recent gift, the Helgesons and many others will get the opportunity to listen and enjoy the variety of offerings on KVSC for years to come.

“We feel that if we have the opportunity to give back that it’s important to do that,” Mike said. “We want to support our local community and help make it a better place for future generations.”