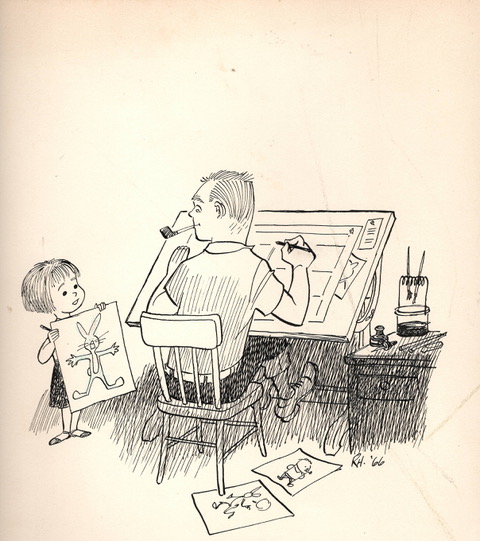 Ralph Heimdahl graduated from St. Cloud State in 1930, a time when the Charleston was all the rage and F. Scott Fitzgerald emerged as a leading American literary figure. For Heimdahl, ruggedly handsome and quarterback of the Huskies football team, his own artistic expression as a talented illustrator was coming into focus as well. 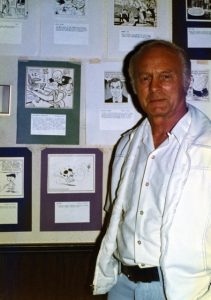 Following a short stint as a teacher, Ralph arrived in California and worked as an illustrator on Disney’s “Dumbo” and “Fantasia” animated features. But it was shortly after this that he landed the gig that would engage him throughout the rest of his professional career and connect him to one of American’s most beloved comic book icons – Warner Brothers. Bugs Bunny! Ralph drew the daily and Sunday Bugs Bunny comic strip for over 30 years before his retirement.

Now, thanks to Ralph’s daughter, Martha Slavin, Ralph’s work has come home to St. Cloud State to inspire and instruct future artists and illustrators studying here, as well as fans of the genre. Over 5,000 drawings and illustrations of Bugs Bunny cartoon strips were gifted to the University Library’s archives by Martha. The drawings illustrate the progression of how a comic story and cartoon strip comes together through its various stages.

“St. Cloud State played an important role in my father’s life” according to Martha. “He received his initial training at SCSU which gave him the basis to build a life-long career doing something he loved and that brought so many smiles to folks every day. I’m sure he would be happy knowing his body of work might inspire a new generation at his alma mater and it gives me great satisfaction knowing the work will be preserved as part of the University’s archives.”