A student with the Gertrude Simmons Bonnin cutout 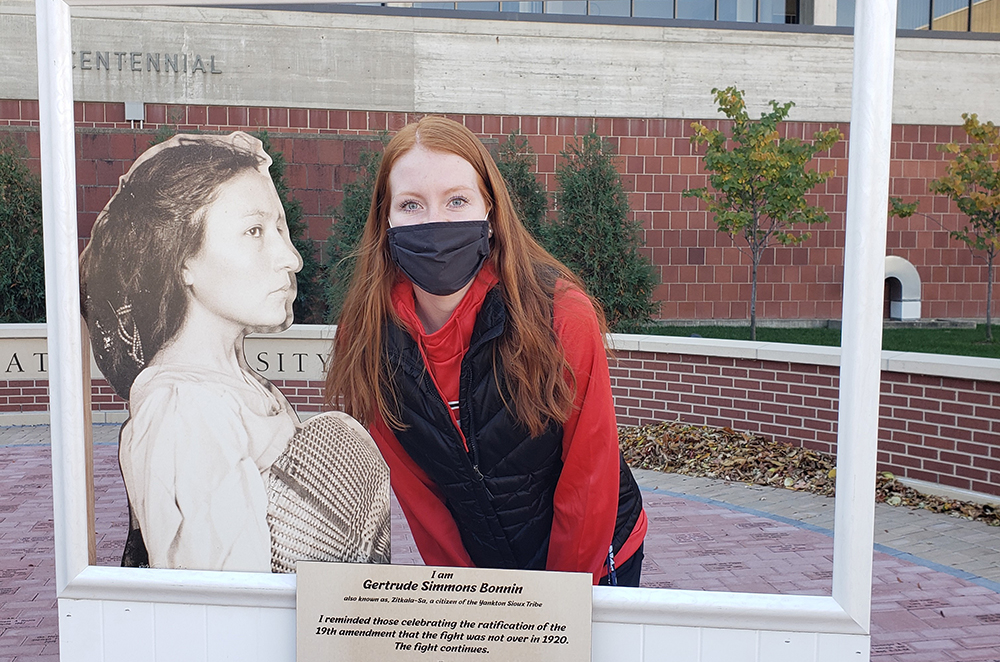 A student poses for a picture with Gertrude Simmons Bonnin, a member of the Yankton Sioux Tribe who worked for women's rights along with Native American citizenship, rights and suffrage.

The St. Cloud State Make It Space is helping campus celebrate 100 years of women voting by creating life-size cutouts of some of the leaders of the women’s suffrage movement.

The cutouts made by student worker Sam Joyce and Assistant Professor Mark Schroll in the Make It Space feature Jeannette Pickering Rankin, Gertrude Simmons Bonnin (Zitkala-Ša) and Ida B. Wells. The cutout statues are making their way across campus for students and visitors to take photos with and celebrate 100 years of women voting in the United States.

Women in the United States earned the right to vote across the entire country when Nineteenth Amendment was passed in August  1920 prohibiting the government from denying the right to vote on the basis of sex.

The first cutout was displayed in Wick Science Building in September and features Jeannette Pickering Rankin, the first woman elected to serve in the U.S. Congress in 1916. She introduced a constitutional amendment guaranteeing women’s suffrage.

The Make It Space has since added cutouts of two other leaders of the suffrage movement to the lineup.

Gertrude Simmons Bonnin,  Zitkala-Ša, was a member of the Yankton Dakota Sioux, who advocated for Native American citizenship, suffrage and rights. She was active in the women’s movement creating an Indian Welfare Committee in the General Federation of Women’s Clubs and exposed the exploitation of Native Americans in Oklahoma.