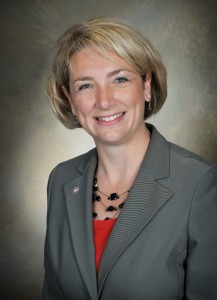 To listen to Director of Athletics Heather Weems speak is to hear her passion for the student athlete experience.

Since stepping into her new role six months ago at St. Cloud State, Weems’ days and evenings have been filled with meetings from greeting her coaches and staff to introductory sessions with individual teams, campus and community members and booster groups.

She said she became an athletic administrator to change lives and thought she could make the most impact in collegiate athletics working directly with the student athletes.

If she can help the coaches do their best, then ultimately she has had an impact on the student athletes.

“I consider myself a coaches’ administrator because I believe in what they do. I believe my job is to facilitate and empower them to do theirs.”

Weems loves college athletics because at the end of the day, student athletes are touchable. “They are real and different from what you see in professional sports. Fans and young people can come up, say hello to them, get an autograph, and see that our student athletes are balancing their academic, social and athletic lives, and do it in a positive way.”