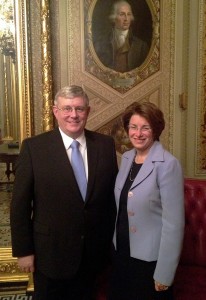 Potter has been a vocal supporter of easing work-visa restrictions for international students, most notably supporting the proposed Immigration Innovation (I2) Act of 2013.

Sen. Klobuchar is one of four sponsors of the so-called “I-Squared” bill that would, among other things, reform the H-1B visa category for persons seeking professional jobs in the U.S. The annual cap of 65,000 H-1B visas would be expanded to 115,000, with the possibility of an increase to up to 300,000 annual visas, depending upon hiring demands.

Supporters of the bipartisan measure argue the current system of educating international students in science, technology, engineering and mathematics — then sending them back to their home countries — amounts to training our global economic competitors.

“America must be a country that makes things again, that invents things, that exports to the world, and to do that we need the world’s talent,” Klobuchar said in a news release. “Right now we’re educating and training our competition by sending students who obtain advanced degrees here in the U.S. back to their home countries.”