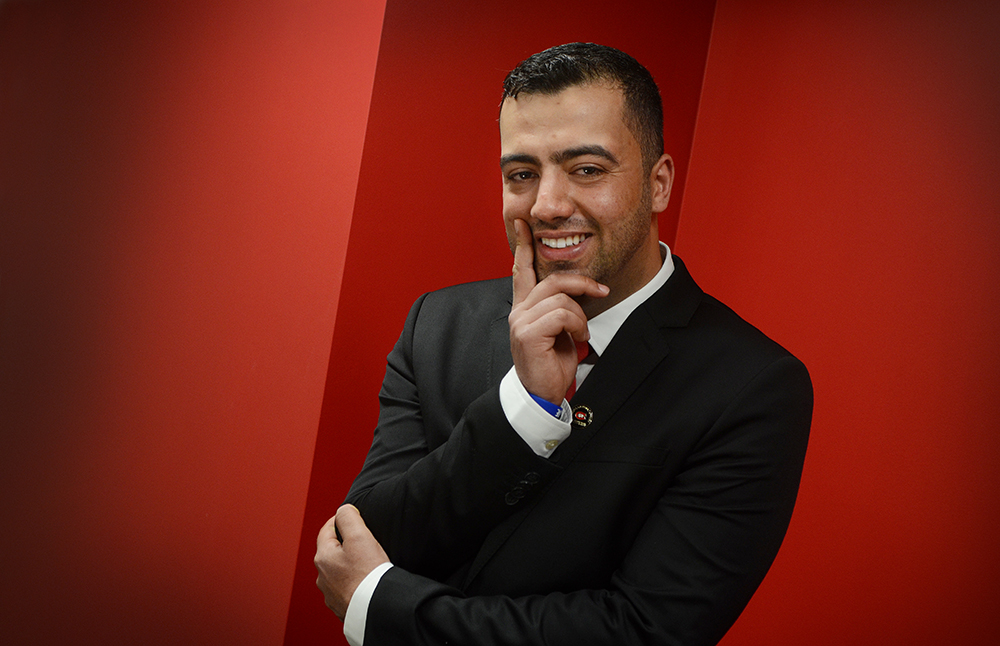 Seeking avenues to world peace — particularly in the Middle East — has been an elusive goal for many. Issa just might have the street cred and focus to effect change. “Education is the way to lead people to challenge the toxic ideologies that create fear and hate,” said Issa, who earned his bachelor’s degree in economics in May 2013. He is studying toward a master’s degree in applied economics.

“Peace is not God’s gift; it’s what people give each other,” he said.

“Walid is a very special student,” said King Banaian, professor of economics and director of the School of Public Affairs Research Institute, where Issa is a graduate assistant. “When we interviewed for a GA for the Institute, he was clearly someone who had come with skills we never see in grad students.

“He runs nonprofits; he gets grants; he develops and executes programs,” Banaian said. “He is someone who, despite all he’s done, still has a humility and a sense of wonder when something good happens for him. It’s really refreshing to have someone do so well who has such a grateful heart and an inquiring mind.”

Issa’s remarkable journey began in the Palestinian refugee camp where he lived with his family of eight children. He describes it as a place where intense poverty, violence and grief were prevalent. “It was hard to grow up there,” he said. “We were very poor, but we were very rich in compassion and love.”

At 16, after witnessing the killing of his teacher, Issa was given the chance to heal through the Minnesota-based Ark for Peace program. He graduated from high school in Bethlehem, but limited resources kept him from attending college at home. His “American mom” in Minnesota sent him to a community college, then he transferred to St. Cloud State.

His story became international news two summers ago when Issa was one of 10 young people — five Israelis and five Palestinians — brought to Washington, D.C., by a group called the New Story Leadership (NSL) for the Middle East to be part of a radically different approach to peace-building.

In an article about this internship experience published in the Times of Israel, Walid said: “I never had the chance to get to know Israelis and the American Jewish community from the inside. By sharing an office with them, I’ve been struck by how they’re trying to do good things for the new generation in Israel and Palestine by working toward a two-state solution.”

It was there he formed a goal he has since brought to life — launching a website where joint Israel-Palestinian innovations can be “crowd-funded.” He was invited to speak about his experience at prestigious venues such as the Paul H. Nitze School of Advanced International Studies at The Johns Hopkins University and was interviewed on high-profile media outlets such as C-SPAN (http://cs.pn/1gXahmy).

Since that unique learning experience Issa has co-founded Shades with his NSL counterpart Lior Frankiensztajn, an organization that aims to bring Israeli and Palestinian students together for intense training in negotiation and creative problem-solving skills, and is evolving as a model designed to empower tomorrow’s leaders from areas with political conflict. They have recruited Harvard and Columbia professors to teach negotiation management and dispute resolution skills in innovative ways, including exposing participants to peace-seeking environments such as Northern Ireland.

“It is most impressive to those of us who have been involved in Walid’s education to know that his journey will not be one of escape from the challenges of the troubled region he came from but one of embracing those challenges and seeking bold solutions.”

A second program Issa initiated is SAWA, a nonpolitical crowd-funding website that invites any person living in Palestine or Israel to share a creative, entrepreneurial or inventive idea in need of funding. The website, available in Arabic, Hebrew and English, removes the geographical barriers that prohibit connectivity and seeks to empower people to work together for a better future for the region.

Issa was honored this past year with the Welter World Citizen Award from Minnesota State Colleges and Universities, a tribute and scholarship given for practicing his belief in being a citizen of the world, appreciating differences and helping others without looking at their color, race or religion. “This world is the only place all of us have,” Issa said. “Tolerance and understanding are the avenues to coexistence.”

He also was chosen by President Earl H. Potter III to receive the 2014 Minnesota Campus Compact President’s Student Leadership Award, given to a student who models a deep commitment to civic responsibility and leadership, evidenced by initiative, innovative and collaborative approaches to addressing public issues, effective community building, and integration of civic engagement into the college experience.

“It is most impressive to those of us who have been involved in Walid’s education to know that his journey will not be one of escape from the challenges of the troubled region he came from but one of embracing those challenges and seeking bold solutions,” Potter said.