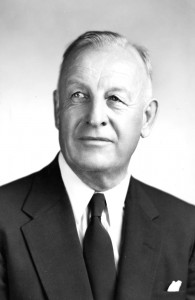 It’s widely known that George Clooney directed, co-wrote and stars in the film “The Monuments Men,” a depiction of a World War II platoon’s efforts to rescue art masterpieces from Nazi thieves and return them to their owners. What most don’t know is St. Cloud State’s George Selke, president from 1927-46, had a principal role in this successful effort to protect cultural treasures.

According to the Monuments Men Foundation, 345 men and women from 13 nations with expertise as museum directors, curators, art historians, artists, architects and educators worked to protect monuments and other cultural treasures from the destruction of World War II. Selke, the St. Cloud State’s longest-serving president, was one of the 345.

In the last year of the war, these cultural heroes tracked, located, and in the years that followed, returned more than 5 million artistic and cultural items stolen by Hitler and the Nazis.