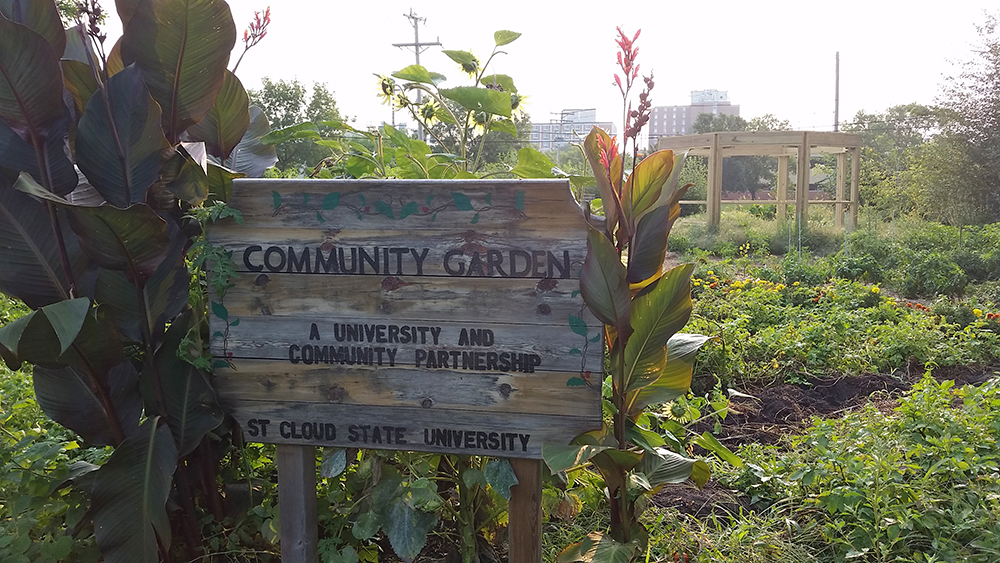 The Community Garden is green and growing with work begun on the gazebo.

The Community Garden laid the foundation for its new gazebo this summer thanks in part to a $5,000 St. Cloud State University Foundation challenge grant.

The Community Garden earned the grant following the campus’ annual faculty and staff Campaign in which donors met the target goal of 40 new or reactivated donors, earning the $5,000 gift from the Foundation. Each year, faculty and staff make gifts to a wide variety of Foundation funds including scholarships, academic and athletic programs. The goal for 2017’s campaign was $155,000.

The gazebo was designed by Professor Mitch Bender’s environmental and technology students, who also designed the garden’s irrigation system. The gazebo is available for campus and community use as a space to enjoy the beauty of the garden and reflect, said Tracy Ore, Community Garden coordinator.

“I am just hoping it becomes a gathering space,” she said. “Right now the garden is really pretty, and it’s full of all kinds of pollinators. ere’s lots of flowers, there’s things growing. It will be nice to sit in it and enjoy it.”

The garden is funded by donations, a small stipend from the university and sales of produce and preserves at the university Farmer’s Market held on campus each fall. It is designed to foster a bridge between the University and the greater community in a space where people can participate in planting, growing and harvesting food. The garden is served by volunteers and has been growing since ground was broken
for the garden in 2005.