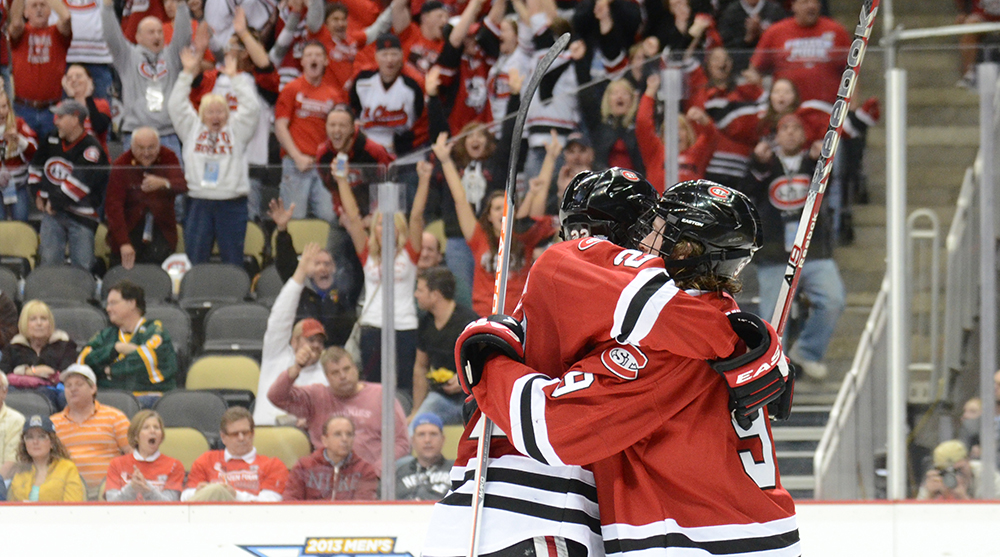 Joey Benik is congratulated on the ice after scoring the Huskies lone goal in the second period. Photo by Adam Hammer ’05

The Huskies posted a 4-2 victory over Wisconsin in Madison on March 8, earning St. Cloud State a share of the Western Collegiate Hockey Association (WCHA) regular season title and the MacNaughton Cup for the first time in team history.

The Huskies went on to sweep Alaska Anchorage in first-round play of the WCHA playoffs and then qualified as the top seed at the 2013 WCHA Final Five in St. Paul. A loss to Wisconsin in the semi-finals of the WCHA final proved to be just a bump in the road for the Huskies as they went on to clinch an National College Athletics Association (NCAA) tournament bid and a trip to the NCAA Division Midwest Regional in Toledo, Ohio.

The Huskies proved to be giant killers with an epic 5-1 win over No. 1 seed Notre Dame in the regional opener.

The victory propelled St. Cloud State into the championship game of the Midwest Regional against future National Collegiate Hockey Conference rival Miami University.
St. Cloud State wasted little time in earning the upper hand in the game with a pair of goals by regional MVP Joey Benik, a freshman from Andover. The Redhawks rallied with one goal in the second period, but a two-goal barrage courtesy of junior Cory Thorson, Crystal, sealed the deal for the Huskies. 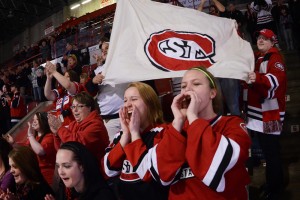 Fans cheer for their Huskies. Photo by Adam Hammer ’05

The pair of NCAA wins provided the Huskies with their first NCAA regional championship since moving to the Division I level in 1987-88. St. Cloud State’s post-game celebration on the ice in Toledo was later capped by a welcome home ceremony that featured hundreds of the Husky faithful greeting their team at the St. Cloud airport.

The regional title extended the Huskies season into April by providing them with their first trip to the big dance — the NCAA Division I Frozen Four.

In the national spotlight, the Huskies enjoyed their journey to the NCAA Frozen Four at the Consol Energy Center in Pittsburgh, Pa. Pre-game activities, media attention and ceremonies provided St. Cloud State with the red carpet treatment.

The Huskies’ season came to a close on April 11 with a tough 4-1 loss to No. 1 seed Quinnipiac in the semifinals of the NCAA tournament. St. Cloud State finished the year at 25-16-1 overall and were 18-9-1 in the always rugged WCHA.

Back in St. Cloud, the Huskies were feted at a special ceremony that gave fans an opportunity to see the progress being made on the renovations to their home arena. The celebration also provided the proper backdrop for the announcement that the Huskies’ home facility will now be known as the Herb Brooks National Hockey Center, which will honor the contributions that Brooks made to the program at St. Cloud State and the sport of hockey.